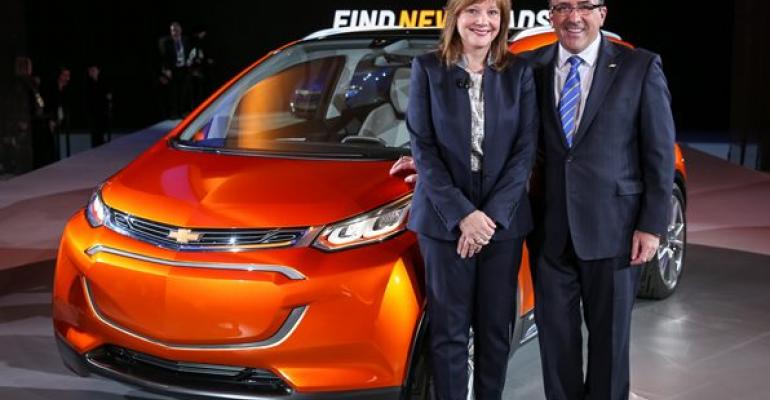 &ldquo;It&rsquo;s a concept vehicle,&rdquo; Barra warns. &ldquo;But if it is going to fit the equation that customers are looking for then, yes,&rdquo; it will cost $30,000.

DETROIT – General Motors CEO Mary Barra introduces the 200-mile (322-km) Chevrolet Bolt electric-vehicle concept, suggesting the long-rumored Tesla fighter will make it to market soon and be priced at about $30,000.

“It’s a concept vehicle,” she warns journalists after the EV joins the redesigned ’16 Chevy Volt on stage at the North American International Auto Show. “But if it is going to fit the equation that customers are looking for then, yes,” it will cost $30,000.

GM says the Bolt leverages electrification technology already in use on the Volt and Chevy Spark and Cadillac ELR EVs. However, its lithium-ion battery system will push it an estimated 200 miles, or 150 miles (240 km), further than the electric range of the redesigned Volt. And unlike the Volt, it does not use a range-extending internal-combustion engine and is capable of DC fast-charging.

“The Bolt EV concept is a natural flow from the work we’ve done and the expertise we have in electrification, and listening to our customers about what they want,” she adds. “It is an affordable solution, as well.”

GM puts no timetable on the Bolt’s arrival, but it is aimed squarely the Tesla Model 3, which is due soon from the California EV maker after several delays. Tesla CEO Elon Musk has said the Model 3 will cost about $35,000 and boast a range upwards of 300 miles (483 km).

Barra’s predecessor, Dan Akerson, reportedly first commissioned the Bolt. Barra only says it has been in the works “for quite a while,” and does not view low U.S. fuel prices as a headwind for the car.

“That’s the situation now,” she says of $2 per-gallon, “but when we look at the long term (it) does not change our strategy one bit.”

Barra declines to say whether the Bolt will be profitable at $30,000. GM executives previously have admitted the Volt was not profitable. She does say, however, that it makes sense for the Chevrolet brand rather than another GM division where the automaker potentially could exercise greater pricing flexibility.

“When you look at Chevrolet, it is a natural product line for it,” she tells WardsAuto. “It supports what we trying to with technology and it is a car for everyone.”

Barra expects GM would sell the Bolt in multiple markets beyond the U.S.