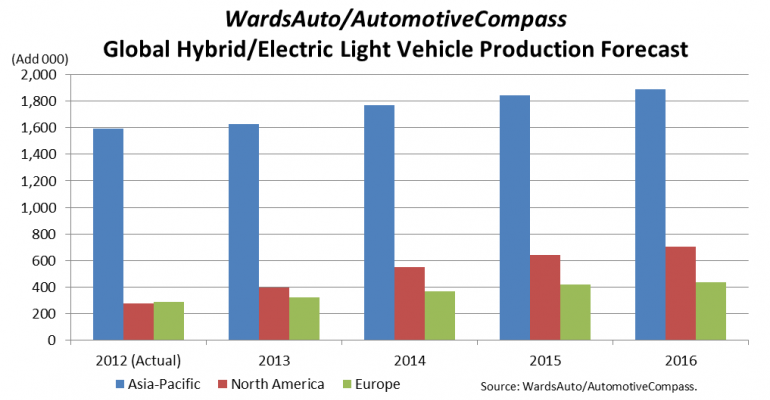 In 2016, the number of EV nameplates in production will total 96, an increase of just five from 2013. By comparison, output of hybrid nameplates will jump from 185 to 234 in the 3-year period, according to a WardsAuto/AC forecast.

Global production of hybrid and electric vehicles will increase by almost a third in annual volume in the next three years, but remain at minuscule levels overall compared with total light-vehicle output, according to a WardsAuto/AutomotiveCompass forecast.

Growth will be led by North America, but the Asia-Pacific region, primarily due to Japan, will continue to dominate global hybrid/EV production.

EVs, which have come under scrutiny in the U.S. in terms of their environmental impact when accounting for their manufacturing footprint, will double in annual volume in 2016 compared with 2013. But they still will fall short of 0.5% of global LV output. Hybrids will be hard-pressed to reach 3.0% of world production.

A lack of enthusiasm among auto makers for EVs seems apparent. In 2016, the number of EV nameplates in production will total 96, an increase of just five from 2013. By comparison, output of hybrid nameplates will jump from 185 to 234 in the 3-year period.

Toyota will continue to dominate the market. Although only a bit player in the EV segment, the Japanese auto maker still will manufacture more than half of all hybrids globally in 2016, even as more competitors’ vehicles enter the arena.

In terms of volume, Toyota will remain one of the biggest hybrid/EV gainers in the next three years. Other projected leaders include BMW, General Motors, Honda and Renault/Nissan,

By region, hybrid/EV production in Asia-Pacific will rise to nearly 1.9 million units annually in 2016 from 1.6 million this year, with Japan accounting for three-fourths of the volume. Japan also will be responsible for more than half the world’s hybrid/EV output at least through 2017.

Toyota will produce two-thirds of the hybrid/EV vehicles in Asia-Pacific in 2016, finishing the year with 1.2 million units.

China, despite being the world’s high-volume vehicle producer by country, will account for only 8% of global hybrid/EV output in 2016. However, it will be the second-largest producer of EVs behind the U.S., with Japan fourth just behind France.

North American hybrid/EV volume will surge 79% in 2016 from 2013 to 705,000 units, equal to slightly more than 4% of total forecasted LV output for the region. Growth will come in spite of Nissan cancelling plans to build an Infiniti EV luxury sedan at its Smyrna, TN, plant and Toyota’s recent decision not to make Prius hybrids in Blue Springs, MS.

GM will spur the region’s production increase, starting this year with the launch of hybrid versions of the Chevrolet Equinox and GMC Terrain cross/utility vehicles and Chevy Impala sedan. Output of the all-new Cadillac ELR extended-range EV begins in December.

Renault/Nissan also will be behind much of the North American growth over the next three years due in part to production of the Leaf EV that launched at the end of 2012, and an upcoming hybrid version of the new Pathfinder CUV. It also is expected to add hybrid options to two cars built in North America by the end of this year.

Additionally, Honda is forecast to more than triple its North American hybrid production from 2013 to 2016 sparked by the new Accord.

Although the region will lag Asia-Pacific and North America in volume, its ratio of EVs to hybrids will be higher. Renault/Nissan, with the French-built electrified Zoe, will lead a 75% surge in EV volume in Europe in 2016 compared with 2013.

Europe’s EV production will top 96,000 units in 2016, with Renault/Nissan accounting for three-fourths of that total.

Europe also will build 29% more hybrids in 2016 compared with its forecast output this year, reaching 340,000 units. Growth will be spread between BMW, which will double its output in three years, Geely, PSA Peugeot Citroen, Toyota and Volkswagen.