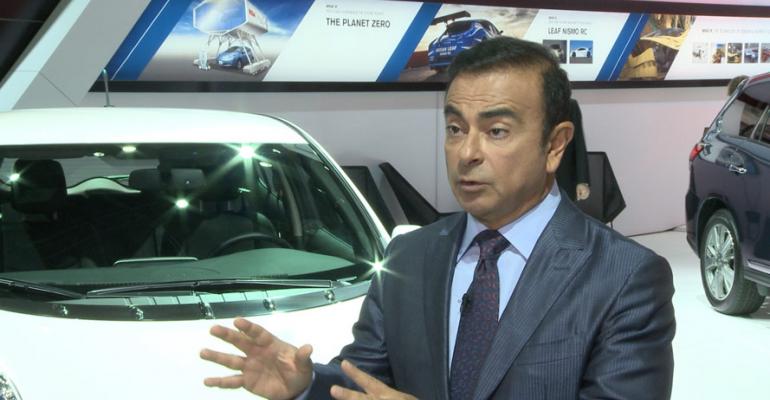 The CEO acknowledges product development is less efficient when two or three companies work on a project, but the eventual savings are compelling for all involved.

NEW YORK – Nissan and Infiniti account for 8% of the U.S. light-vehicle market, but Carlos Ghosn is targeting a 10% market share for the two brands.

In a press conference at the New York International Auto Show, the CEO of Renault and Nissan reaffirms Nissan’s intention to capture 10% of the Chinese market (albeit a year later than originally planned) and carve out a leading position in emerging markets such as Russia and Indonesia.

Collaboration is a growing trend within the auto industry, Ghosn notes.

“Everyone wins and pays less” when developing new products, he says. The Renault/Nissan CEO admits partnering is less efficient when two or three companies work on a project, but the eventual savings are compelling for all involved.

When developing products on its own, an auto maker needs a very large scale – annual sales of 8 million to 10 million units – to sustain costs, particularly exploding engineering expenses, Ghosn says. Any efficiency that is sacrificed by collaborating with two or three other auto makers eventually is outweighed by cost savings of up to one-half, he says.

Ghosn insists that cooperating with other car companies still allows Renault/Nissan to develop distinctive products, not badge-engineered ones.

The CEO also maintains his targets to grow market share won't come at the expense of profits. Ghosn doesn't plan to buy market share; his goal is to achieve sustainable volume growth. When a sales milestone is reached in the U.S., for instance, Nissan will fight to win another increase.

Headwinds “beyond its control” that Nissan faced in China forced Ghosn to postpone sales targets in that market by one year. Those headwinds no longer exist and the auto maker now is returning to its plan to achieve 2 million sales in China by 2020, he says.

Ghosn’s desire to see Nissan become the leading brand in other emerging markets is why he is resurrecting the Datsun marque, building a new plant in Brazil and designing a new car in India. He notes that Nissan offers no products in the lowest 30% of the segments in emerging markets. He sees that as an opportunity to expand the auto maker’s sales without cheapening brand equity.

Despite disappointing sales of the all-electric Leaf, Ghosn sees the car making some progress. With increased supply, Leaf sales are approaching 1,900 units this month.

“I'm confident we're going to get into high speed and this will be a milestone year for Leaf,” he says. “Our ambition is sell much more than 2,000 units per month for Leaf. But we're going to have to be more patient.”

He is encouraged to see governments helping promote EV growth without Nissan’s asking. “We don't need that help forever,” Ghosn says. “If we did, the product would be doomed.”

Nissan will continue reducing the price of the Leaf as it finds ways to trim production costs, including sourcing more local parts and components. Ghosn reveals Leaf's development costs were double those typically incurred by a conventional car.