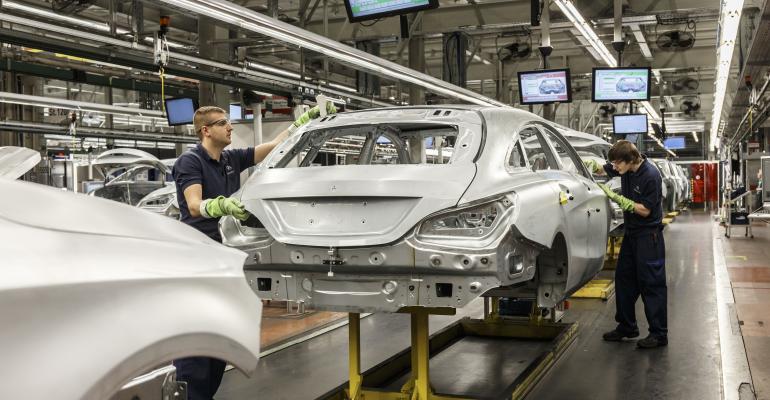 Daimler is particularly active in expanding its manufacturing footprint in the region. The company last month announced plans to build a second plant at its site in Kecskemet, Hungary, for the production of front- and rear-wheel-drive cars.

Daimler is particularly active in expanding its manufacturing footprint in the region. The company last month announced plans to establish a second plant at its Hungarian site in Kecskemet for the production of front- and rear-wheel-drive cars.

“In the next few years, we plan to invest around €1 billion ($1.13 billion) in building a new plant at our site in Kecskemet,” Markus Schäfer, member of the divisional board for production and supply chain management, Mercedes-Benz Cars, says in a prepared statement.

“We will establish a state-of-the-art and efficient production facility, in which different vehicle architectures will roll off the assembly-line flexibly.”

The second plant in Kecskemet will have a body shop, a paint shop, a final assembly and a supplier park.

According to Peter Szijjarto, Hungarian Minister of Foreign Affairs and Trade, the capacity of the new facility will be 150,000 cars per year.

Preparations will start this year and the start of production is planned “for the end of the decade,” Daimler says. The investment will create about 2,500 new jobs at the site.

Volume production at the Daimler plant in Kecskemet was launched in March 2012. It employs more than 4,000 people and manufactured 180,000 Mercedes-Benz compact vehicles in 2015. Mercedes-Benz B-Class, CLA Coupe and CLA Shooting Brake are made in Hungary. Both CLA models are produced exclusively in Kecskemet for global customers. The new car plant is the second investment in Kecskemet announced by Daimler this year.

In April, the company broke ground for a new €250 million ($282 million) body shop at the existing plant. It is a part of an investment of about €580 million ($654 million) in the expansion of capacity and the technological upgrade of the existing facility for the production of the next generation of compact cars.

Other parts of the existing plant also will be expanded as part of the total investment. The production line will undergo adjustments and use robots for surface treatment. In the final-assembly section for the next generation of compact vehicles, materials will be brought to the assembly line in pre-picked baskets of goods. This will be done completely autonomously by driverless transport vehicles with prepared baskets of components from the logistics and picking zones.

Earlier this year, Daimler also announced the construction of a new engine plant in Poland. It will be located in Jawor, about 44 miles (70 km) west of Wroclaw. An investment of about €500 million ($464 million) is planned for the first stage.

The factory, which will produce 4-cyl. gasoline and diesel engines, will be Daimler’s second site for car engines outside Germany. Production at the new facility launches in 2019.

While Daimler is expanding car production in Eastern Europe, Volkswagen Group also is increasing activities in the region for its Audi and Porsche premium brands.

The Volkswagen Slovakia plant in Bratislava, the capital of Slovakia, is VW’s production site for larger CUVs. It manufactures the Audi Q7 and VW Touareg CUVs as well as painted and fully equipped bodies for the Porsche Cayenne. Its portfolio also includes VW Up!, Skoda Citigo and SEAT Mii minicars.

While the Porsche Cayenne now undergoes final assembly in Germany, the next Cayenne generation will be completely made in Slovakia starting in 2017.

But new premium models are also to be made in Bratislava. The Audi Q8, a coupe-like CUV which will share the platform with the Q7, will be manufactured in Slovakia. There is no official announcement from VW yet, but one of the suppliers already has said it will supply Q8 production in Slovakia.

A future Porsche Cayenne Coupe also may be manufactured in Bratislava.

Volkswagen also is investing in its Slovak plant. It launched construction of a new €500 million welding shop in April 2015 and a €300 million assembly hall last December.

Audi will add a CUV model at its Audi Hungaria plant in Gyor, Hungary. The facility, which currently builds the Audi A3 sedan and A3 convertible as well as TT Coupe and TT Roadster models, will launch the next-generation Audi Q3 in 2018.

However, Audi is preparing for a temporary output reduction in Hungary. The automaker will reduce the number of car-production shifts from three to two starting in December. The shift will affect 750 of the 4,000 people employed at the car-production part of the Gyor facility. The automaker is offering them employment at VW plants in other countries until the production schedule is back to three shifts.

The 750 workers will be able to return to Gyor once serial manufacturing of the Q3 model starts in 2018 at the latest. However, the third shift also may be reintroduced earlier.

Audi’s Hungarian engine production is not affected by the shift reduction. The factory’s engine output decreased 3.3% to 1,031,887 units this year through June.