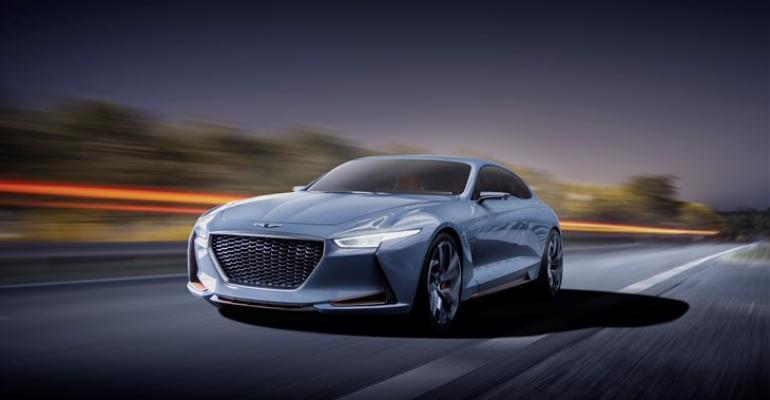 Genesis: We Have It Easier Than Cadillac, Lincoln

Starting from scratch, rather than&nbsp;trying to change people&rsquo;s perceptions, may make the climb up the luxury ladder easier for Hyundai, says U.S. sales chief.

VANCOUVER, BC, Canada – Is it more difficult to launch a new luxury brand or transform an existing one?

It’s a question Hyundai Motor America CEO Dave Zuchowski thinks about a lot as his automaker is launching the new Genesis premium marque.

His opinion? Hyundai has it easier than Cadillac or Lincoln.

In the 1950s and 1960s, General Motors’ Cadillac and Ford’s Lincoln were the No.1 and No.2-selling luxury brands in the U.S. In the 1970s, with imported cars smaller and less showy and unassociated with old money, Cadillac and Lincoln’s sales started to wane against German competitors.

Still today, even as their current designs are lauded by the automotive press, American luxury-car buyers are unable to forget the past stodgy images of Cadillac and Lincoln. Respective January-July 2016 sales of 87,572 and 62,395 for Cadillac and Lincoln were less than half the tally of luxury leaders BMW, Mercedes and Lexus in the same period, WardsAuto data shows.

Zuchowski, who lauds the job Johan de Nysschen is doing as president of Cadillac, believes the storied GM marque got in trouble when it tried to emulate BMW and Mercedes.

“In so doing they actually lost some of their loyal Cadillac owners because they walked away from what their definition of Cadillac was,” he says.

Genesis still is sorting out the definition of Korean luxury, and Genesis U.S. boss Erwin Raphael tells media here he hopes one day to make it a concept as desirable as German luxury. In the home appliance and electronics field, relative newcomers LG and Samsung already are viewed as premium brands on par with Japan’s Sony.

To launch a luxury brand is not an endeavor for the tight of wallet, and Zuchowski says one thing Cadillac is doing right is spending big, or vowing to, on new products and services.

He says his bosses in Korea have accepted the enormous sums necessary to launch Genesis and have “delivered in spades right now. They’re spending a lot of money to do (Genesis) the right way.

“We’ve told the Koreans we can’t do this on the cheap, we can’t do it overnight,” he continues. “We have to be prepared with people and with marketing resources and with product resources.”

Hyundai gives no estimate on how much is being spent to launch Genesis, but it undoubtedly is in the billions of dollars given the brand’s unique platforms, powertrains and staff, the latter group including dedicated designers wooed from established luxury marques.

Eight years ago, upon the launch of the first-generation Hyundai Genesis mid-large luxury sedan, Hyundai said the cost of a standalone luxury brand in the U.S. was a then-prohibitive $2.5 billion. In comparison, Toyota is reported to have spent $5 billion to launch Lexus in the U.S. in 1989, not realizing a profit for 10 years.