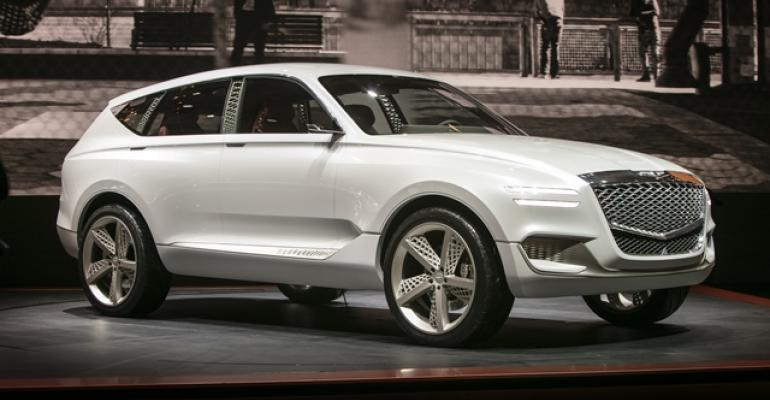 Now entering its second year as a standalone premium brand for Korean automaker Hyundai, Genesis looks to make a big impression on the luxury segment in the next three years.

ST. HELENA, CA – It’s no coincidence that Genesis, Hyundai’s fledgling luxury brand, played a low-key role in sponsoring an Oscar party in February for the cast and crew of “Hidden Figures.”

Like the real-life heroes portrayed in the Academy Award-nominated movie, Genesis as a brand is working hard behind the scenes, sharpening its pencils and making its case for proper consideration – in this case by the premium-car buying public.

“We don’t think that people are going to turn the switch and suddenly forget about other brands and flock to us,” says Erwin Raphael, general manager-Genesis, on the sidelines of a media drive of the ’18 Genesis G80 Sport sedan here. “We think that if people are aware and give us a fair shake and evaluate us,that a decent percentage of them will choose us and that will be enough for us to be very successful,” he says.

So far, that means it’s okay to sell just 20,000 vehicles annually, but look for that number to double on an annualized basis when the more-affordable G70 sedan arrives next April. The growth curve gets even steeper when the first Genesis CUV, based on the GV80 concept revealed in April at the New York auto show, goes on sale in 2019.

A second CUV and a sports coupe – most likely based on the Stinger platform from parent company Hyundai’s sister brand Kia – come a year after that and then, with a full portfolio, Raphael believes the brand will be firmly established as a small and fresh alternative to the American, German and Japanese premium marques.

“It’s certainly our plan to be a new and different alternative,” Raphael says.

While many Genesis buyers come from inside the Korean automaker’s family – most directly from Hyundai – Lexus owners represent the largest segment – 30% – of conquest buyers to the brand, followed by BMW (15%), Cadillac and Mercedes-Benz (both 11%). Acura, Audi, Infiniti and Lincoln buyers make up the balance of conquest buyers.

Buyers largely are white, male, college-educated and older than 50, with median household incomes touching $145,000, but Raphael is quick to point out the Genesis brand is reaching out to all potential luxury buyers and welcomes everyone interested in the products and able to afford the vehicles.

“We made a very deliberate decision early in our lives not to develop an avatar for a particular customer and say that’s who we’re going after,” Raphael says, noting data can be deceiving when it comes to determining ability to afford a premium automobile.

Taking that wide-swath approach means Genesis is deliberately advertising in Spanish and directly to women who often influence buying decisions, African-Americans, Asian-Americans and the LBGT community.

“Part of our DNA is being progressive, and in this case progressive means understanding and respecting our customers for who they are,” Raphael says. “We’re really taking this diversity and inclusion approach to say we’re going to reach out to people and talk with them. The diversity in our advertising reflects that.

“We don’t want anybody – including white males – to feel alienated.”

For now, all Genesis vehicles are produced in South Korea and that won’t change until the brand can reach the kind of global volume – typically 200,000 vehicles – necessary to support a dedicated plant. So far, the brand sells about 90,000 cars annually around the world.

“When the time is right and our sales are such that it makes sense, we would consider it,” says Raphael, who dismisses the idea of building a plant as a “political statement.”

“It would be an option at that point in time, but there’s certainly no commitment at this time.”