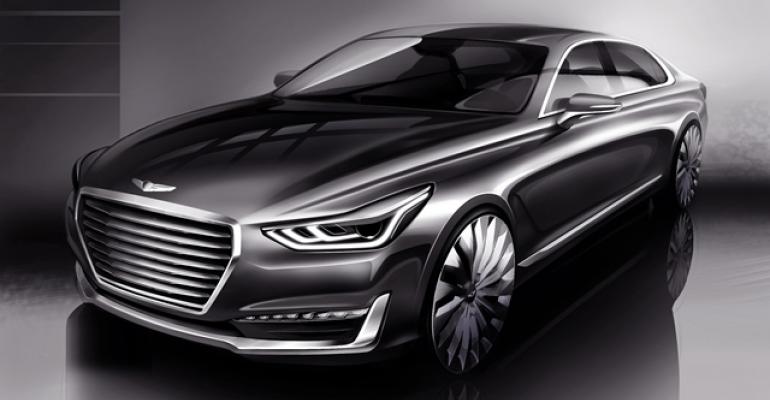 Genesis G90 Scores in First Day of Preordering in Korea

The new model, called the EQ900 in its home market, replaces the current Equus sedan and will be offered with a choice of three engines.

Even Hyundai’s national sales team was surprised when its top of the line EQ900 (G90 in U.S. and other markets when it’s released next year) tallied 4,342 sales on the first day of preordering.

This new generation of the Equus is the first in the family of Genesis-brand luxury vehicles since Hyundai announced establishing a luxury-car division last month.

Hyundai dealers in Korea began receiving preorders for the EQ900 Nov. 23, and will continue to do so through Dec. 9. The official regular sales launch of the top luxury marque in Korea will take place on or before that date, according to a Hyundai spokesman.

When its predecessor, the highly upgraded and redesigned second-generation Equus was released in 2009, it tallied sales of 1,180, then thought by Hyundai to be a magnificent showing.

After four years of development, with extensive field testing in the U.S., Europe, Korea and other countries, the EQ900 will launch domestically with a choice of three engines, the Lambda 334-hp 3.8L V-6 GDi and Lambda 370-hp 3.3L Turbo GDi and the big-gun Tau 5.0L V-8 GDi that develops 425 hp.

Features include Highway Driving Assist with crash avoidance, H-TRAC refined smart all-wheel drive and Hyundai Variable Control Suspension that automatically optimizes ride and handling at all speeds and in all road conditions.

Hyundai says advanced high strength steel is used in 51.7 % of the vehicle, compared with just 16.3% in the predecessor Equus.

Leather from Italian supplier Pasubio covers the heated and cooled seats and steering wheel, and wood trim is used on the door inners and along the instrument panel. A special “First Class VIP” seat for the rear with 18 different positions, including a full recline feature, also is available.

Analysts in Korea expect only a slight bump in pricing and news media report that unnamed Hyundai officials have confirmed the EQ900 will not cost much more than the 68 million-110 million won ($79,000–$127,000) range of the Korean-market Equus it is replacing.

The global G90’s debut takes place at the North American International Auto Show in Detroit in January. It goes on sale in the U.S. in early spring.