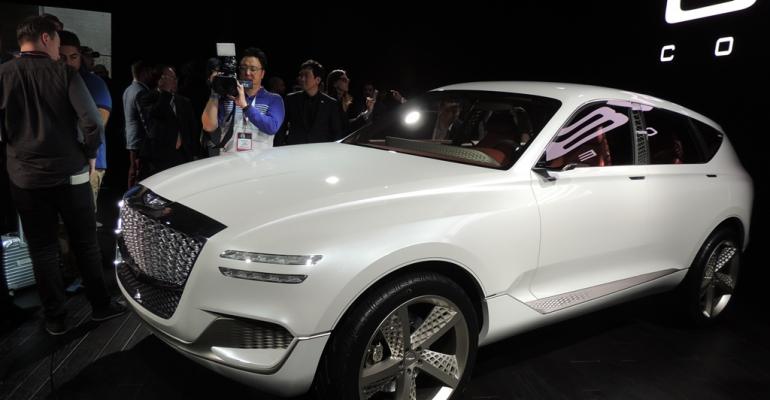 &ldquo;It won&rsquo;t come out as a fuel-cell production vehicle in two years; that I can say,&rdquo; says Manfred Fitzgerald, head of the Genesis brand.

Genesis unveils what is billed as fuel-cell SUV concept vehicle. But the GV80 is not really a SUV. And when the production version comes out, fuel cells won’t power it.

Instead, it’s a CUV, built on the same platform shared by the 2-car lineup of Genesis, the 15-month-old standalone luxury unit of South Korean automaker Hyundai.

And the for-sale version, due out in two years, will contain a hybrid powertrain, potentially a plug-in system, says Manfred Fitzgerald, head of the Genesis brand.

“It won’t come out as a fuel-cell production vehicle; that I can say,” he tells journalists on the sidelines of the GV80 concept’s debut at the New York International Auto Show.

“(The propulsion system) is not really the focus here today,” he says. “The focus is all about design and the design direction we’re taking there. The design (of the concept vehicle) is not too far away from what will be the production version.”

Concept vehicle often are exercises in creative thinking for automakers. What is shown and touted in a concept car often don’t make the final cut for vehicles that go into production, if they are built at all.

For the GV80 concept, Hyundai engineers configured an underbelly infrastructure that would accommodate a fuel-cell system. “They came up with this idea, and we said, ‘Yeah, it fits perfectly for a show car,’” Fitzgerald says.

It’s not as if Hyundai isn’t there yet with hydrogen fuel-cell technology in production vehicles. Such a system in a Hyundai Tucson earned a 2015 Wards 10 Best Engines award.

As for Genesis calling the GV80 a SUV, as the brand did here, a lot of automakers uses the moniker loosely when referring to their utility vehicles. Technically, a SUV is a body-on-frame vehicle. A CUV rides on a car-platform but looks like a SUV.

“You can call it what you like; it’s a very flowing definition,” says Peter Schreyer, Hyundai’s chief design officer, standing beside the GV80 on stage. “It’s a very elegant SUV or CUV.”

When asked if the GV80 isn’t actually a CUV, Fitzgerald says, “Well technically, you are correct. But we are splitting hairs. For the customer, this is a SUV.”

The GV80 will be the first utility vehicle for the Genesis brand that currently consists of the G80 and G90 sedans. Another sedan, the midsize G70, is due out next year. Following the scheduled 2019 launch of the GV80, the brand will introduce a second smaller CUV.

Having two current car offerings in a hot CUV/SUV market is not ideal, but Fitzgerald says that situation will change.

“We’re not there, because we’re a new brand,” he says “What you are seeing today is that we can do more. It shows this brand will have a full-product portfolio. Volume is not what we’re going after right now. This is about establishing a brand and bringing a new proposition to the table.”

Attending the concept car unveiling is Andrew DeFeo, chairman of the Hyundai dealer council and dealer principal of a Hyundai and Genesis dealership in St. Augustine, FL.

“Would we want these CUVs tomorrow? Of course,” he tells WardsAuto. “But everyone wants to make sure they are the right vehicles from design, functionality and quality perspectives. It will be worth the wait.”