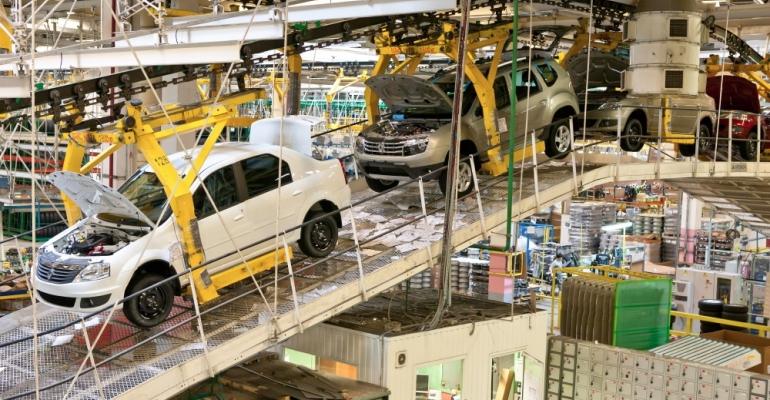 Local brands are benefiting from higher percentages of localization, price increases lower than those of foreign brands and state programs aimed at supporting demand, particularly those in the low-cost segment of the Russian car market.

ST. PETERSBURG – The share of cars produced by foreign automakers in Russia will decline this year for the first time since 2000, Ministry of Industry and Trade analysts say.

The biggest decline, 56.6%, is expected to be recorded by Kaliningrad-based Avtotor, a contract assembler for several global automakers.

The decline will result mainly from the loss of General Motors, a key Avtotor customer.  In addition to Avtotor, production declines of 50% likely will be seen at Ford Sollers facilities in Vsevolozhsk in the  St. Petersburg region and in Elabuga in the Republic of Tatarstan.

By contrast, output at AvtoVAZ factories in Togliatti and Izhevsk, which focus on Renault-Nissan Alliance models, should increase 36.4%.

The Federal Statistics Service reports overall car production in Russia fell 23.2% from January  through October to 1.1 million units. Light-vehicle sales from January through November were down 34.5%, according to WardsAuto data.

Global automakers’ current weakness in Russia has resulted in the strengthening of domestic brands, particularly Lada and UAZ, whose shares of local production both increased 1% in the year’s first 10 months to 16.9% and 2.9%, respectively.

Local brands are benefiting from higher percentages of localization, price increases lower than those of foreign brands and numerous state programs aimed at supporting demand for cars in Russia, particularly those in the low-cost segment of the market.

Ministry of Industry and Trade analysts predict foreign automakers’ share of production in Russia will continue to decline in 2016, despite the launch of new models including the Toyota RAV4 and Hyundai Creta.

Foreign automakers are expected to continue raising prices because of the ongoing devaluation of the Russian ruble. Indeed, the weak ruble may force other manufacturers to follow GM’s lead and halt local production of some models, while a shift in demand toward low-cost cars may force some dealers to replace part of their foreign range by domestic models.

The Russian government also will continue to provide additional support to domestic brands in an attempt to further increase their level of localization.

Most foreign automakers have refused to disclose their plans for Russia in 2016. Kia Russia, however, expects sales will remain on the same level as in 2015, although the automaker notes market conditions are changing rapidly.