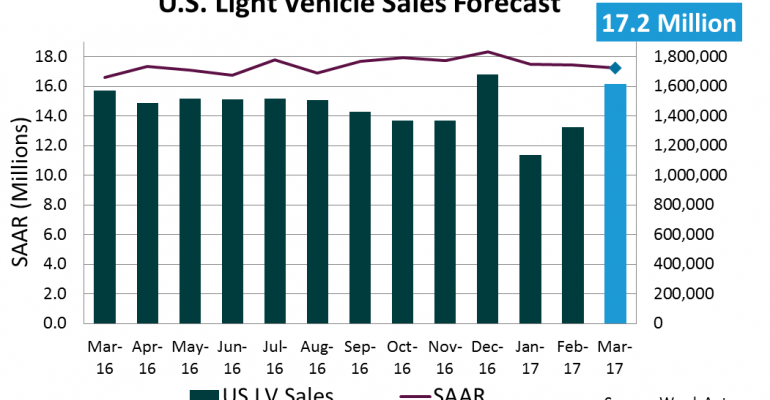 A WardsAuto forecast calls for U.S. automakers to deliver 1.61 million light vehicles in March, a 17-year high for the month.

The forecasted daily sales rate of 59,776 over 27 days is a best-ever March result. This DSR represents a 2.6% improvement from like-2016 (also 27 days). March is anticipated to be the first month in 2017 to outpace prior-year.

The forecast 8.2% DSR gain from February (24 days) is less than the 7-year average month-to-month increase of 14%.

The report puts the seasonally adjusted annual rate of sales for the month at 17.2 million units, below the 17.4 million SAAR from the first two months of 2017 combined, but well above the 16.6 million from same-month year-ago.

Success in light-truck segments is expected to continue this month. Light-truck sales are forecast at about 1,005,000 units, a 62% share. Cars will make up the remaining 609,000 vehicles.

Production plans at North American plants are responding to this shift in vehicle-type demand with a 5.8% increase in light-truck output and a 4.9% decline in car builds for the second quarter on 2017. However, total Q2 volume is scheduled to be up 1.9% vs prior-year, despite a trend of high inventory since August of 2016.

February’s U.S. light-vehicle stock hit record volume for the month of 4.1 million units. The streak of record-high inventory is expected to continue with 4.2 million units at the end of March, 10.8% greater than same-month 2016. This will leave automakers with a 71 days’ supply, down from prior-month’s 74 days, but ahead of year-ago’s 66. Stocks are expected to remain high through Q3 without a large drop in production or surge in incentive activity.

Honda is expected to see the greatest year-over-year growth of the top seven automakers, up 6.9%. The jump in March sales will leave its 3-month total 5.1% greater than like-2016.

Hyundai-Kia will sell about 128,000 vehicles, leaving the group down 4.5% on a monthly and quarterly basis.