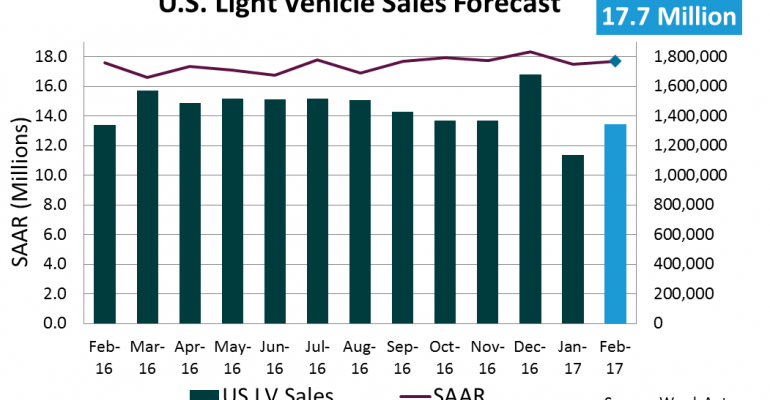 The report puts the seasonally adjusted annual rate of sales for the month at 17.70 million units, compared with year-ago’s 17.60 million and January’s 17.48 million mark.

U.S. dealers ended January with record-high inventory, and manufacturers are maintaining overall strong production plans, likely pushing February light-vehicle sales ahead of last year even though demand should be undergoing a cyclical downturn after seven straight years of increases through 2016.

Car inventory, which ended January at a 93 days’ supply, remains troublesome for automakers unable to cut production enough or provide enough incentives to keep up with a consistent decline in demand.  Light-truck stock in January was up 15.5% from year-ago (84 days’ supply), but is at a healthy level for this time of year.

At forecast levels, February LV sales would bring year-to-date deliveries to 2.48 million units, down just 0.7% from same-period 2016. WardsAuto is forecasting 17.3 million LV sales for calendar 2017, but the market could exceed expectations if inventory remains exceptionally high.