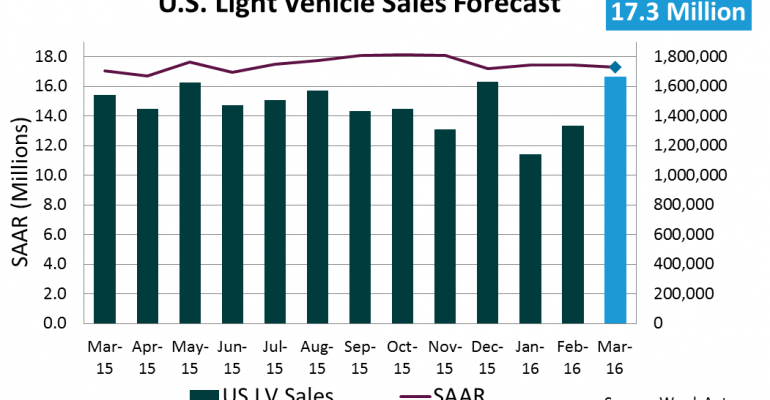 The forecast daily sales rate of 61,727 is a best-ever March result.

A WardsAuto forecast calls for U.S. automakers to deliver 1.7 million light vehicles this month, a record high for March and the largest volume for any month since July 2005’s 1,804,240 units.

The forecasted daily sales rate of 61,727 over 27 days is a best-ever March result. This DSR represents a 0.2% improvement from like-2015 (25 days), while total volume for the month would be 8.2% greater than year-ago. If deliveries meet or exceed WardsAuto’s expectations, March will be the eight consecutive month to outpace prior-year on a DSR basis.

The report puts the seasonally adjusted annual rate of sales for the month at 17.3 million units, below the 17.4 million SAAR from the first two months of 2016 combined, but well above the 17.1 million SAAR from same-month year-ago.

Inventory is expected to total 3.8 million units the end of March, flat from the 3.8 million units in February. This will leave automakers with a 63 days’ supply, down from prior-month’s 69 days, but ahead of year-ago’s 58.

Success in light-truck segments is expected to continue this month. Light-truck sales are forecast at 951,000 units, a 57% share. Cars will make up the remaining 716,000 vehicles.

Automakers are preparing for a strong Q2, as the WardsAuto production schedule shows a 4.8% increase in builds compared with Q1.