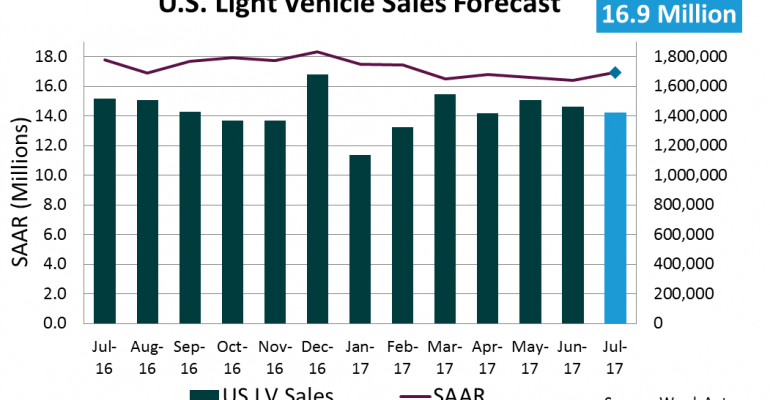 July volume will result in a 16.9 million seasonally adjusted rate of sales.

A WardsAuto forecast calls for U.S. light-vehicle sales to reach a 16.9 million-unit seasonally adjusted annual rate in July, following June’s 16.4 million SAAR and resulting in a 5-month streak of sub-17 million figures. July’s SAAR would be significantly lower than the 17.8 million recorded in same-month 2016.

The report is calling for 1.42 million light vehicles to be delivered over 25 selling days in July. The resulting daily sales rate of 56,893 units represents a 2.5% decline from year-ago (26 days).  The 1.0% month-to-month gain from June (26 days) differs from the average 3% decline from June to July seen over the past three years.

The industry continues to deal with declining sales and rising inventory, especially of cars. U.S. dealers entered July with 4.15 million vehicles in stock, resulting in 73 days’ supply, while a total in the low 60s is considered healthy for this time of year.

While an inventory sellout is necessary, WardsAuto expects the highest incentive activity to take place in the later part of Q3, right before model-year 2018 vehicles enter the market.

The forecast shows 3.87 million vehicles in stock at the end of July, a 68 days’ supply at the expected sales rate, greater than year-ago (66 days) and the 10-year average for the month (56 days).

Of the top seven automakers, the best year-on-year results are expected from Nissan, down just 0.4% to 127,000 LVs. The company also shows a positive 7-month outcome, 1.7% ahead of year-ago.

Honda sales are forecast to fall 0.6% over year-ago on 146,000 deliveries. This would bring the January-July total 0.8% below prior-year.

Hyundai-Kia Group should see a year-over-year drop of 6.8% this month, with forecast volume of 121,000 vehicles. The sister companies are expected to sell 763,000 units this year through July, resulting in an 8.9% drop from like-2016.

At forecast levels, year-to-date LV sales through July would come to 9.82 million units, down 2.8% from same-period 2017.