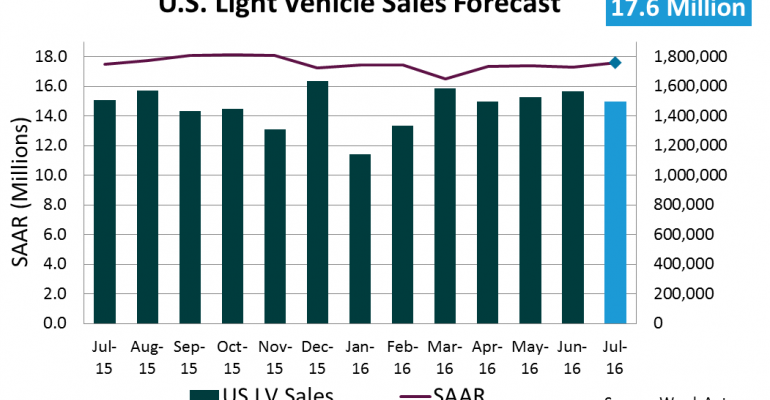 A WardsAuto forecast calls for U.S. light-vehicle sales to reach a 17.6 million-unit seasonally adjusted annual rate in July, following June’s 16.6 million SAAR. July’s SAAR would be significantly higher than the 17.1 million recorded year-to-date through June, and would help bring 2016 sales in line with WardsAuto’s full-year forecast of 17.6 million units.

The report is calling for just under 1.5 million light vehicles to be delivered over 26 selling days in July. The resulting daily sales rate of 57,602 units represents a 0.5% decline from same-month year-ago (26 days).  The 0.6% month-to-month drop from June (also 26 days) is less than the average 6% decrease from June to July seen over the past three years.

Light trucks are expected to outsell prior-year by 7.3% with 914,065 sold in the month. Many North American truck plants are running near or even over straight-time capacity this year, limiting growth in domestic trucks. Sales of imported models, however, are forecast to rise 17.5%.

Although the unemployment rate increased slightly in June, according to The Bureau of Labor Statistics, the Conference Board’s Consumer Confidence Index improved, with gains in both the Present Situation Index and the Expectations Index.

Automakers finished June with 3.83 million units in inventory, equating to a 66 days’ supply going into July, providing some additional upward pressure on sales. July is expected to end with 3.60 million vehicles, resulting in a 62 days’ supply.

General Motors is forecast to sell approximately 268,000 light vehicles in July, boosted by heavy incentive activity early in the month. Although volume is down 1.8% from year-ago, the resulting market share is pegged at 17.9%, a high point for any month of 2016. Year-to-date volume would reach 1,707,000 units, 4.0% below prior-year.

Of the top seven automakers, the largest gain on year-ago is expected from Nissan, jumping 2.9% to 135,000 LVs. The company also shows the greatest 7-month gain, 7.5% ahead of year-ago.

Honda sales are forecast to fall 1.6% over year-ago on 144,000 deliveries. This would bring the January-July total 4.1% above prior-year.

Hyundai-Kia Group should see a year-over-year gain of 0.9% this month, with forecast volume around 128,000 vehicles. The sister companies are expected to sell 831,000 units this year through July, resulting in a 2.6% improvement over like-2015.