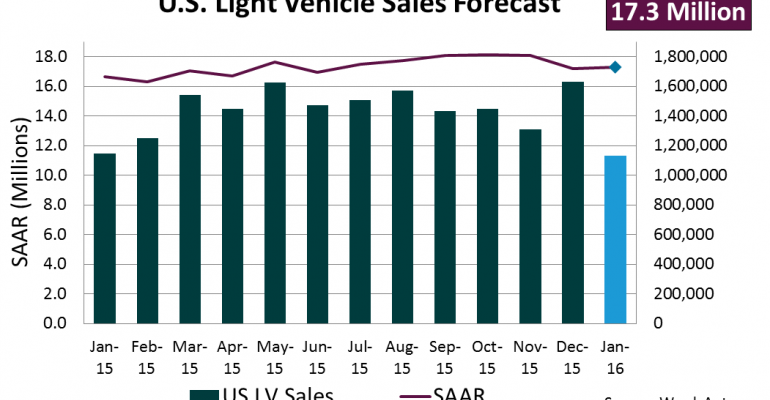 The 5-year average December-to-January decline is 26%, but the traditional pull-ahead of sales in December was not as strong as expected this time. Lighter deliveries allowed dealers to remain well-stocked with vehicles highest in demand going into January.

The report puts the seasonally adjusted annual rate of sales for the month at 17.3 million units, compared with a year-ago’s 16.6 million and December’s 17.2 million.

The total includes 645,000 light trucks, a record for January. Light-truck sales will continue to be boosted primarily by CUV models. Cars account for 486,000 units of the LV tally. As midsize and large car shoppers turn to CUVs, small variants will be the most popular in this category.

Inventory is expected to total 3.82 million by the end of the month -- a 7.3% increase over year-ago equating to 81 days’ supply at the projected daily sales rate.

The forecast calls for Ford to deliver 173,000 LVs in January and reclaim the No.2 sales spot after ceding the position to Toyota in November and December. The 7.7% DSR gain gives the company a 15.3% LV share.

The forecast also calls for Nissan to outsell Honda for the first time in 10 months, though by a close margin. Nissan is expected to sell 102,000 LVs, a 5.8% gain in DSR. The Honda forecast shows a 6.9% improvement to 101,000 units delivered.

Hyundai-Kia is projected to record the greatest year-over-year growth, up 12.8% on a daily sales basis with 86,000 vehicles in the month.

The proportion of those expecting their incomes to rise declined from 17.3% to 16.3% percent, but the proportion expecting a reduction in income slipped from 11.8% to 9.7%.

The Bureau of Labor Statistics says the unemployment rate remained at 5.0% for a third month in December. The average hourly earnings for all employees on private nonfarm payrolls, at $25.24, changed little (down $0.01), following an increase of $0.05 in November.

Crude oil prices continued to plunge, down to $26.55 per barrel as of January 21, 28% below like-2015 and under $27 for the first time since September 2003. While low fuel prices are a boon for automobile drivers, they cause concern for Wall Street in relation to energy sector bankruptcies.