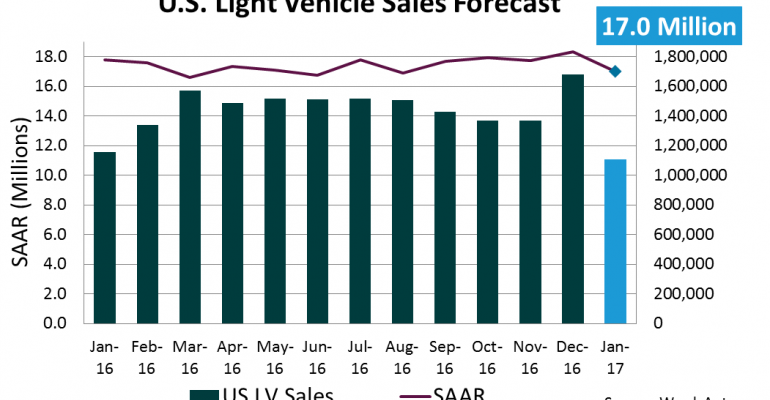 After a record-high December, average daily sales are expected to plummet 26.0% moving into January.

The U.S. automotive industry is expected to a have a slow start in the new year, with January light-vehicle sales down 4.4% from like-2016. The WardsAuto forecast calls for 1.107 million LVs to be delivered over 24 selling days, resulting in a 46,109-unit daily sales rate compared with 48,226 in prior-year (also 24 days).

The lackluster outcome will follow record-high sales in December due to heavy holiday promotions at the end of the month, which created a pull-ahead effect on potential January sales. Average daily sales are expected to plummet 26.0% between the two months.

The resulting seasonally adjusted annual rate is 17.0 million units, well below the 18.3 million in the previous month and 17.4 million year-ago.

December inventory was 9.2% above same-month 2015, the biggest year-over-year gap since the summer of 2014. Weak sales in January will keep inventory levels high, 16.0% greater than year-ago. A 93-day supply is expected to be available at the end of the month, a major jump from 62 days in December and 77 in January 2016.