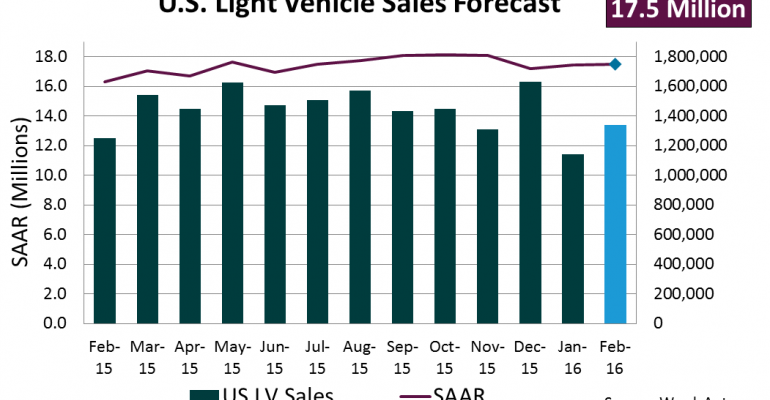 The report puts the SAAR for the month at 17.50 million units, compared with year-ago&rsquo;s 16.32 million and January&rsquo;s 17.45 million mark.

A WardsAuto forecast calls for U.S. automakers to deliver 1.34 million light vehicles in February, a 15-year high for the month. The forecasted daily sales rate of 55,868 over 24 days represents a 7.1% improvement from like-2015 (also 24 days).

The report puts the seasonally adjusted annual rate of sales for the month at 17.50 million units, compared with year-ago’s 16.32 million and January’s 17.45 million mark.

Gas prices continue to decline, falling below $1.90 for most of the month, resulting in the lowest monthly average in 10 years. Low fuel costs will continue to move shoppers from cars to light trucks.

Manufacturers are straining to keep up with demand in the hottest-selling segments, mainly CUVs, but the 3.7 million LVs in stock at the end of January are more than enough to support forecasted sales.

WardsAuto expects February inventory to near 3.7 million units and leave the industry with a 66 days’ supply, down from 78 days the prior month and 69 days a year ago.

As truck production is pushed to its limits, a 65 days’ supply is expected to be available at month-end. Automakers are culling inventory of cars by slowing output, leaving a 67 days’ supply as February closes, down significantly from 81 days a month earlier.

At forecast levels, February LV sales would bring year-to-date deliveries to 2.48 million units, a 3.5% gain over same-period 2015. WardsAuto currently is forecasting 17.8 million LV sales for calendar year 2016, with the Q2 SAAR rising from Q1. Sales volumes should continue outdoing the same year-ago period at least until May, when the month has two fewer selling days than in 2015.

The forecast is influenced by some positive economic indicators. The Conference Board’s January Consumer Confidence Survey showed an increase in the percent of respondents expecting business conditions to improve over the next six months. The Bureau of Labor Statistics found a small increase in the number of jobs and wages and the unemployment at an 8-year low in January.