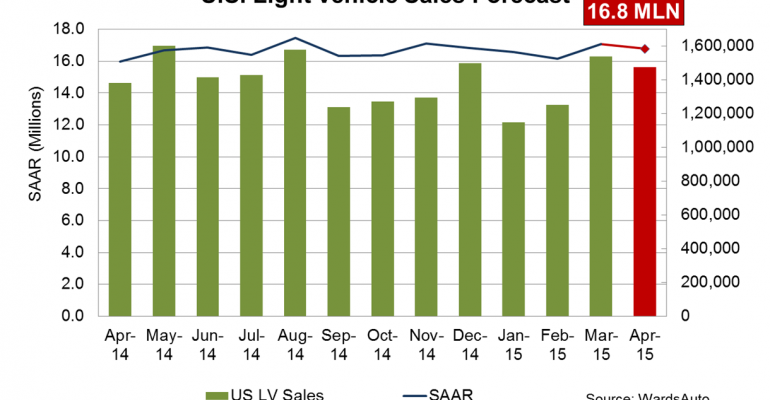 The latest WardsAuto forecast calls for U.S. automakers to sell 1.47 million light vehicles this month, equating to a 16.8 million-unit SAAR.

If deliveries meet or exceed WardsAuto’s forecast, April will be the 14th consecutive month to outpace prior-year comparisons.

The report puts the seasonally adjusted annual rate of sales for the month at 16.8 million units, down from March’s 17.1 million SAAR, but some 800,000 units above year-ago and slightly ahead of the 16.8 million first-quarter SAAR.

The forecast reflects reports strong retail activity in the beginning of the month, with a smaller share of sales attributable to fleet orders for a number of OEMs, as well as a seasonal month-to-month downturn for most Asian automakers.

Output in March kept pace with sales, maintaining inventory at 3.6 million units, with few noticeable holes in any given segment. WardsAuto expects stocks to remain at that level at least another month, leaving the industry at a 63 days’ supply at the end of April, compared with March’s 58 days and year-ago’s 69.

WardsAuto is forecasting General Motors to deliver nearly 268,000 light vehicles this month, a 5.4% improvement from year-ago. The market’s No.1 seller is expected to grab an 18.2% share up two points from March but slightly below year-ago.

Ford’s DSR is forecast to rise 6.3% from year-ago, as the automaker’s new F-Series pickups gain steam in the retail sector and put the automaker in the No.2 spot overall for the second consecutive month, with a 15% share.

The forecast calls for Nissan’s DSR to rise 9% from its year-ago rate, while claiming a 7.7% share of the market – compared with its end-of-fiscal-year 9.4% share recorded last month. Hyundai also is expected to see a month-to-month decline in share, with forecast sales of 121,000 equating to an 8.2% penetration of the market, compared with 8.5% last month.
Honda is the exception among the largest Asian automakers with an expected month-to-month 2.5% increase in daily sales from March, equating to a 9.1% share. At forecast levels, Honda would outsell both Nissan and Hyundai Group for the first time since December.