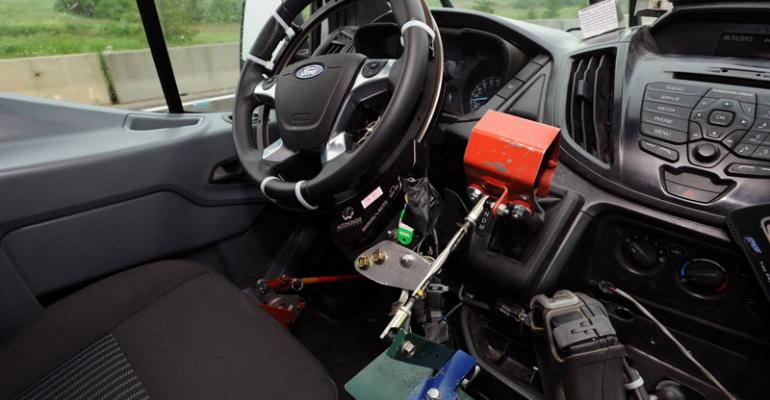 The robotic system uses an electric motor attached through a ring gear to the steering wheel to direct the vehicle, while a series of low-cost linear actuators work with belt cranks that push the pedals similar to a human driver.

Initial work on the robotic test-driver program began three years ago, with the first tests conducted in October 2012 with the ’15 Super Duty pickup.

Dave Payne, manager-vehicle development operations, says the program was initiated because the durability tests for new Ford products became too harsh for human drivers to repeatedly endure, such as driving over large curb-like cement blocks, cobblestones and rough gravel.

“We’re always trying to go faster and develop products faster and make ‘Ford Tough’ DNA tougher all the time,” he tells WardsAuto at a media event here. “There are some roads we can’t allow drivers on anymore.”

Payne says none of the proving ground’s 34 full-time test drivers have lost their jobs because of the autonomous test drivers, but some part-time employees may see their work scaled back.

When Ford conceived the project, it sought an appropriate supplier partner but found many companies offering robotic drivers were charging too much. The auto maker eventually teamed with Utah-based Autonomous Solutions, which offered to install the technology for less than $100,000 per vehicle.

However, modifications to the supplier’s technology were necessary, as it originally was designed to control autonomous agricultural equipment that did not exceed 5 mph (8 km).

Payne says Ford worked with Autonomous Solutions on the changes, including safety improvements.

The system consists of an electric motor that attaches through a ring gear to the steering wheel to steer the vehicle, while a series of low-cost linear actuators work with belt cranks that push on pedals, providing input similar that of a human driver.

Payne says the next-generation technology will tap into Ford’s by-wire systems, negating the need for physical mechanisms to control the steering and pedal inputs.

Vehicles undergoing autonomous testing are continuously monitored from a control booth on the proving ground and can be driven 24 hours a day by remote operators working 12-hour shifts. About 75% of Ford’s durability tests now can be done autonomously, Payne says.

He likens the robotic control system to “Wi-Fi on steroids.” The test vehicles are tracked by a sophisticated global-positioning system that can pinpoint their precise location on the proving-ground track. Should the system malfunction, a large red button in the control booth can be pushed to instantly shut down the engines.

Autonomous testing so far has included the upcoming Transit commercial van, Expedition SUV and Fusion, Focus and Fiesta cars. Up to four vehicles can be tested simultaneously, but Payne says they are working to up that number to eight vehicles.

In addition to the severe testing such as driving on cobblestones, some vehicles travel at high speeds for long periods on the proving ground’s oval track, which is draining on human drivers.

“The reason we started this (robotic program) was to go faster, and doing durability testing faster is tough on people,” Payne says.

The autonomous vehicles and those piloted by human drivers are not allowed to interact, but he says engineers are working on ways to allow both to operate on the same track at the same time.

“By the end of the year, we might have mixed-traffic trials going on, but we’re taking it slowly,” Payne says. “We’re making sure we’re prepared, and we’ll expand strategy to mixed traffic when ready.”

Plans call for the autonomous test-drive technology to be introduced at other Ford test facilities, with Australia the next to launch the robotic durability tests.

The technology also will be deployed for other purposes, including polishing rocks at the auto maker’s Dearborn, MI, proving ground starting next year. The rocks are used to pave the facility’s wet test track and require annual polishing to ensure they are slippery enough.

Payne says outsourcing the job costs about $200,000. Using the robotic system, the only expense will be for fuel. “So, there are other applications like that we’re looking at.”

While the autonomous test-driver technology provides cost and efficiency benefits, it is unlikely to completely displace human drivers anytime soon, Payne says, noting the brain is tough to replicate.

“Brains are wonderful computers, and replacing the five senses is quite a task,” he says.