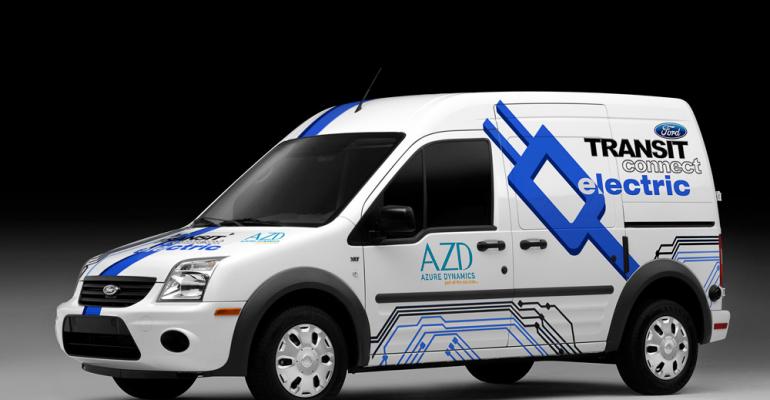 The auto maker says it is repurposing its Dearborn, MI-based Advanced Engineering Center to focus solely on the development of electrified vehicles.

“Our priority is to ensure that Azure’s Transit Connect Electric customers continue to have support throughout their ownership experience,” Ford spokesman Wes Sherwood tells WardsAuto.

Although the Transit Connect EV is badged a Ford, Azure Dynamics is the vehicle’s manufacturer, Sherwood says.

Ford provides the Detroit-based Azure with Transit Connect bodies built at its Kocaeli, Turkey, assembly plant, and Azure installs the electric powertrain and sells the vehicle through select Ford dealerships. About 500 units reportedly have been sold since 2010.

Calls to Azure for a statement on the future of the Transit Connect EV went unreturned, but some media reports indicate the vehicle could be discontinued. The company reportedly has halted production and is not sure when or if operations will restart.

With the future of the Transit Connect EV hanging in the balance, Sherwood says Ford remains committed to its electrification program.

The auto maker is repurposing its 285,000-sq.-ft. (26,477-sq.-m) Advanced Engineering Center in Dearborn, MI, to focus solely on the development of electrified vehicles. The facility will house more than 1,000 engineers working to advance Ford’s EV programs.

Ford says it plans to triple the production capacity of its hybrid, plug-in hybrid and electric vehicle in the U.S. next year compared with 2011.

The auto maker recently launched the Focus EV and will offer hybrid and plug-in hybrid versions of the Fusion midsize sedan and C-Max cross/utility vehicle later this year.

The powertrain for the Focus EV is sourced from Aurora, ON, Canada-based supplier Magna, but all of Ford’s other electrified vehicles have powertrains that were developed in-house, the auto maker says.