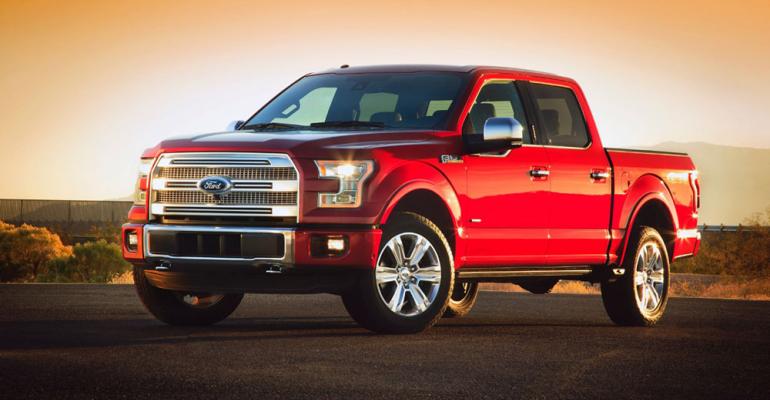 Ford to Spread Aluminum Use Beyond F-150

DETROIT – Ford executives say to expect the automaker to use more aluminum throughout its product line in the future, and believe consumers will embrace the all-new ’15 F-150 pickup that features a body composed almost entirely of the lightweight material.

“I think over time we will see more and more aluminum across the entire product line,” Ford CEO Alan Mulally tells WardsAuto during the North American International Auto Show here. “But the real value initially is in the larger vehicles, because you can take the most weight out.”

Depending on cab configuration, the automaker says the new F-150 will be up to 700 lbs. (317 kg) lighter than the current-generation truck, which has a traditional steel body.

Some have questioned the toughness of aluminum and whether it would be durable enough for the F-150, which often is employed for work duties. Mulally says his time leading Boeing’s commercial-aircraft division made him a believer in the ruggedness of aluminum

“The aluminum alloys we’re using are very similar to what we use in commercial airplanes, and they’ve proven their toughness and durability over the years,” he says. “So I think this is a fantastic next step to improve the F-150.”

Ford says it will release pricing information closer to the launch of the new product, which is scheduled to go into production at the automaker’s Dearborn, MI, truck plant in the fourth quarter and go on sale shortly after.

Aluminum is a more expensive material than steel, but Mulally says using it on a volume product such as the F-150 will allow the automaker to leverage economies of scale and keep the truck’s price competitive with other models on the market.

Joe Hinrichs, Ford president-The Americas, says the aluminum alloy used in the new F-150 is similar to the material employed to make military vehicles such as the Humvee, which has proved its durability during years of service.

Hinrichs says the new F-150 will be more dent-resistant than the outgoing model and notes the frame uses more high-strength steel than before. He adds the automaker learned much about aluminum manufacturing when it owned Jaguar, which uses the material extensively.

“We’ve thickened the gauge of the aluminum compared to the steel we used previously, so we’ve actually added reinforcement,” he tells WardsAuto. “The real strength of the vehicle is in the platform, and we’ve strengthened that with more high-strength steel.”

The ’15 F-150 will be offered with a new 2.7L direct-injected turbocharged EcoBoost V-6 engine with standard start/stop. Other engine options include a 3.5L naturally aspirated V-6 engine, 3.5L EcoBoost V-6 and 5.0L V-8.

When asked about the risk of introducing aluminum in Ford’s most profitable product, Mulally says the timing is right.

“I think it’s a very manageable risk for Ford,” he says. “We have a lot of experience in aluminum and so do our suppliers around the world. Now is the time because we have enough experience and we know the characteristics and the value it brings.”