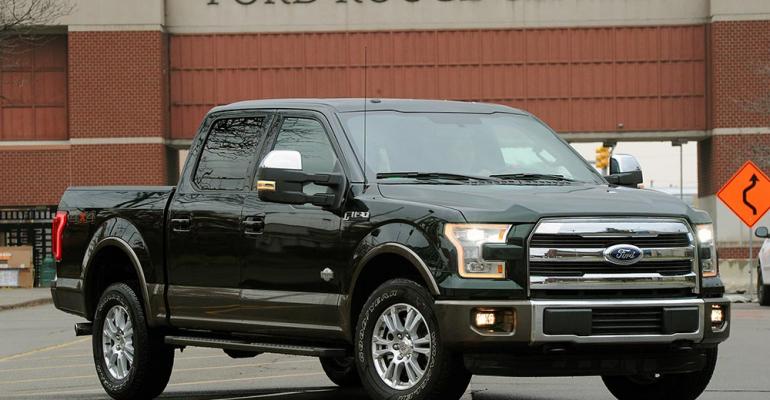 Ford&rsquo;s Dearborn, MI, truck plant now is producing the new &rsquo;15 F-150, but its Kansas City, MO, facility has yet to transition.

Ford sales rose just 2.1% in November on a daily-selling-rate basis as the automaker continues to manage the transition to the new aluminum-intensive ’15 F-150 pickup.

The switchover has left Ford with limited supplies of the outgoing model, which has hampered sales the past several months. The automaker expects the situation to continue into next year when its Kansas City, MO, plant begins shifting production over to the new F-150.

“We’re managing carefully through the transition and everything is on plan,” John Felice, vice president-U.S. Marketing, Sales and Service, says in a conference call with journalists and analysts. “It’s a delicate balance and we’re being disciplined with incentive spend and average transaction prices.”

“Housing is improving and fuel prices are down, which is a really positive economic condition for fullsize pickups,” he says. “But until (the model) changeover is complete we will see sales tempered by F-Series.”

Low fuel prices may provide a boost for fullsize pickups but are having the opposite effect on other segments.

“With low fuel prices, we suspect small cars will remain flat as a percentage of the industry at just under 20%,” he says. “Next year small utilities could surpass the small-car segment.”

The Mustang pony car had a strong month as inventories of the new ’15 model were built up. Mustang deliveries soared 68.8% to 8,728, the car’s best November tally since 2006.

“Mustang had a breakout month,” Felice says. “Mustang growth is strong all over, but strongest in Texas, while California is second. It’s turning in just eight days.”

Ford utility sales in November were strong, with the exception of the Edge CUV, which posted a 9.2% decline vs. year-ago to 7,648. Deliveries of the Escape CUV rose 26.5%, while the Explorer and Expedition SUVs were up 19.4% and 18.5%, respectively.

Ford’s November sales also were impacted by a deliberate pullback on deliveries to rental-car agencies. Year-to-date, Ford fleet sales to commercial businesses were up 2% and increased 16% to government agencies, but were off 16% to rental-car companies.

“We’re now at the point where we see stability in the rental business,” Felice says. “Some months will be up, some will be down, but (sales) will be reasonably steady.”

Lincoln deliveries were up 21%, marking the luxury division’s best November since 2007. The increase was driven primarily by the new MKC CUV, which accounted for 2,152 deliveries in the month. Most other models posted decreases, including the MKZ midsize sedan, which was off 23.6%.

Despite the precipitous drop by the MKZ, Lincoln’s second-newest product, Felice says he’s pleased with the direction of the marque.

“Momentum is building as we close out the year,” he says. “It’s good to see MKC performing well and lifting the brand.”