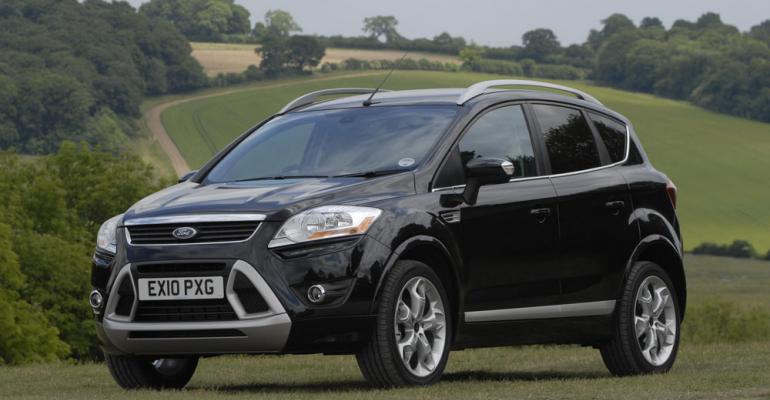 The auto maker expects U.S. momentum to continue in 2013 with profits about equal to last year, largely due to adequate supplies of the new Ford Fusion midsize sedan and Escape CUV that reside in the two largest segments.

Ford continues to leverage the strength of its North American home market, reporting a global pre-tax profit of $1.7 billion for fourth-quarter 2012, up $577 million compared with prior-year, and $8 billion for the full year, $797 million less than year-ago.

The auto maker’s North America full-year global pre-tax profits of $8.3 billion last year and $1.8 billion in the fourth quarter helped it set records for both periods.

As a result, the auto maker says it will make profit-sharing payments to about 45,000 eligible U.S. hourly employees in March. As part of the collective bargaining agreement with the United Auto Workers union, Ford’s North American pre-tax profit will generate about $8,300 per eligible employee on a full-year basis.

The auto maker expects the momentum to continue in 2013 with profits about equal to last year, largely due to adequate supplies of the new Ford Fusion midsize sedan and Escape cross/utility vehicle, which reside in the two largest U.S. segments.

Chief Financial Officer Bob Shanks says the decline largely resulted from the discontinuation of the Ranger small pickup and Crown Victoria fullsize sedan, as well as capacity constraints and reduced availability of the Fusion and Escape.

Shanks expects share to increase this year but declines to reveal internal targets. Healthy supplies of the Fusion and Escape, combined with the recent 400,000 units in additional capacity and an improving fullsize-pickup market should bolster sales.

“(Additionally), we’re getting great contributions from the C-Max (hybrid),” Shanks says today in a conference call with analysts and reporters. “It’s well-received, and we think that will also help us, but to a lesser degree because of the capacity (constraints) we have for that product.”

South America presented special challenges in 2012, as trade restrictions and currency fluctuations impacted growth, Ford says. The auto maker posted a full-year pre-tax profit of $213 million in the region, down $648 million from 2011.

“We have had to reduce the units we bring in from Mexico,” Shanks says. “Mexico had a free-trade agreement with Argentina and Brazil that was essentially suspended and replaced with quotas. We can import from Mexico, but with much lower volumes than in the past. So that’s one of the things constraining us in the shorter term.”

Ford also was saddled with legacy products unique to the South American market but is launching a fresh portfolio of global vehicles in the region this year. “We will be in more segments, from 67% to over 80%,” he says. “So the breadth of the market we cover will be broader.”

For 2013, Ford expects its South America results to be about breakeven, but warns government actions to incentivize local production and balance trade are creating friction between South American countries and Mexico. That could short-circuit sales.

Ford’s Asia/Pacific and Africa region posted a full-year pre-tax loss of $77 million and a fourth-quarter profit of $39 million. Most of the loss was due to heavy investments in China, where the auto maker is building five plants.

But the near-term pain of the loss will result in greater profitability in the region, particularly China. “A lot of new products we’re in the process of developing are affecting costs, but revenues have yet to come,” Shanks says. “We think of APA as on the way, and we expect it to have meaningful contributions in profitability by mid-decade.”

As with South America, Ford expects Asia/Pacific Africa to be breakeven this year. However, Shanks predicts volume and revenue growth in the region will accelerate with the launch of new products such as the Kuga and EcoSport cross/utility vehicles, Mondeo midsize sedan and Fiesta B-car.

Europe continues to be a drag on Ford’s global operations, with the auto maker posting a $1.75 billion pre-tax loss in the 19 markets in which it operates for full-2012 and a $732 million fourth-quarter loss.

Ford says the loss was due to unfavorable volume and mix as well as a fourth-quarter seasonally adjusted annual rate of just 13.5 million units, the region’s lowest quarterly SAAR since 1995.

The auto maker says it will continue to monitor the situation in Europe, which is expects to worsen this year. Ford now predicts its full-year 2013 European results at about a $2 billion loss, but says new products such as the all-new Kuga could mitigate the damage.

Ford expects the European market to bottom out in 2014 and then slowly improve. CEO Alan Mulally says the weak business environment will not result in cuts to Ford’s product-development budget for the region.

“The approach we’ve used around the world is absolutely the one for Europe,” he says. “We will size to demand. And in addition, we will continue to invest and even accelerate investment, because even with the slowdown it’s still a tremendous market for us.”