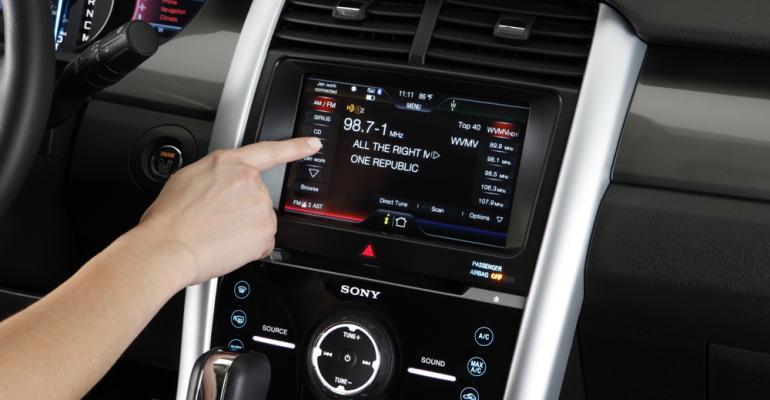 Some owners report they have experienced failures with Ford&rsquo;s MyFord Touch infotainment system and PowerShift transmission, the magazine says.

MyFord Touch has been criticized for being confusing, while the PowerShift transmission has drawn complaints for rough operation. But Jake Fisher, director-automotive testing for Consumer Reports, says problems go beyond that.

“(MyFord Touch) also malfunctions,” Fisher tells WardsAuto following a backgrounder on the survey presented to the Automotive Press Assn. here. “There are a lot of reports of people that actually have to reboot their vehicles. So it fails, the screen goes out and they actually have to turn off their vehicle and turn it on again.”

In the case of the PowerShift transmission offered on the Ford Fiesta and Focus, Consumer Reports has received complaints from consumers of gearbox failures.

“There have been reports where it wouldn’t go into the right gear,” Fisher says. “There (also) were reports where (Ford) is replacing transmissions, and they’ve certainly reprogrammed some of them.”

Ford is aware of issues with both MyFord Touch and PowerShift and has made software updates available to buyers through its vehicle dealerships.

The Consumer Reports survey was conducted before the updates were offered, and Ford spokesman Mark Schirmer says the auto maker should improve its standing in the survey next year.

“Since the (MyFord Touch) update, we’ve done surveys in the spring that show about a 25% improvement in customer satisfaction,” he says. “Hopefully, our data is consistent and in next year’s data we’ll see that satisfaction, and that’s similar with PowerShift.”

Fisher says the magazine has not conducted many tests on Ford vehicles that have received the updates and consumer surveys have not been collected since then.

However, based on limited testing by the magazine, he does not expect the updates to make much of a difference in Ford’s reliability rankings.

“We actually have tested both the updated MyFord Touch and the (PowerShift) transmission,” he says. “It made some difference, but it wasn’t enough.”

Another reason for Ford’s drop: The Ford Escape and Fusion, as well as the Lincoln MKZ, were not included in this year’s survey, because all-new models were in the midst of their launches.

Fisher says taking out those three models, which historically have ranked high in the study, made a difference in Ford’s results.

Toyota brands secure the top three spots in the Consumer Reports rankings, with Scion No.1, followed by Toyota and Lexus.

Of the 27 models in Toyota’s lineup, 16 earn the highest ranking. The Prius C hybrid nets the top score overall, while the hatchback Prius and the larger Prius V and the Prius plug-in hybrid also are ranked above average.

Fisher notes Toyota’s rankings are based on consumer surveys that show the vehicles do not have problems, but says Consumer Reports does not necessarily recommend all of Toyota’s vehicles based on the survey results.

“We didn’t say anything nice about the (Toyota) Yaris, but it doesn’t break down, so I guess it would be lousy for a very long time,” he quips.

Japanese brands dominated the top spots in the survey, with Lexus followed by Mazda, Subaru, Honda and Acura.

Audi, which took the No.8 spot, was surprising, Fisher says, noting the German auto maker has had trouble with reliability issues in the past.

“To see Audi improve so much this year this is something we usually don’t see,” he says. The auto maker moved up 18 spots from last year’s survey.

All General Motors’ brands improved from a year ago, with Cadillac showing the biggest gain in taking the No.11 spot.

Fisher says Cadillac’s ascent, like Audi’s, was unexpected, given the high level of technology offered in its vehicles. Glitches in technology often play a key role in brands dropping in the survey, he says.

“Cadillac at No.11 is impressive, because it has a lot of features where things can go wrong.”

Chrysler’s overall results were negatively affected by a few models, including the Dodge Charger, the Chrysler 300 V-8 and the Jeep Grand Cherokee V-8.

Fisher says the V-8 models usually have more technology, which in the case of Chrysler proved problematic, landing the auto maker in the No.23 position.

“The Jeep Grand Cherokee V-8 is below average, but we can still recommend the V-6,” he says.

The two Korean brands, Kia and Hyundai, were ranked No.10 and No.17, respectively. Both were undone somewhat by technology-laden vehicles, particularly the Hyundai Sonata turbo and hybrid, both of which ranked below average.

The reliability rankings are based on surveys conducted of vehicle owners, with a minimum sample size of 100 vehicles per nameplate.

In the survey, conducted earlier this year, owners are asked to report serious problems they’ve had with their vehicles in the past 12 months. Consumer Reports bases its reliability scores on the most recent three models years of data, provided the model has not been redesigned for 2013. The scores are presented as a percentage better or worse than the average of all cars.