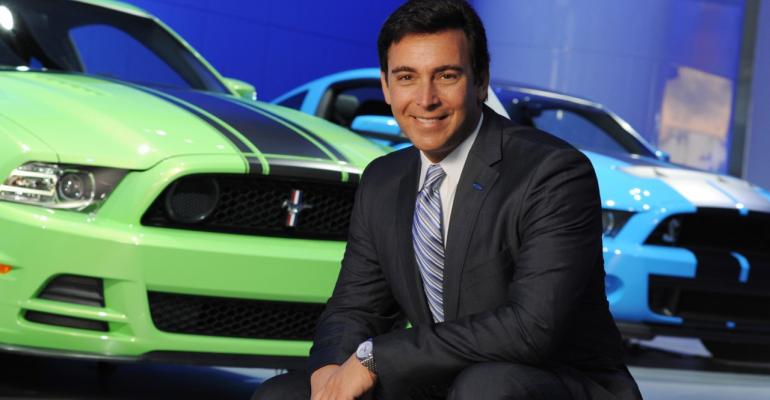 Fields says lower gasoline prices are a positive for consumers, but long term it&rsquo;s not going to change their desire for more fuel-efficient vehicles.

DEARBORN, MI – Ford has no plans to change its product plans due to falling gasoline prices, CEO Mark Fields says, noting the automaker has not seen a significant shift in consumer buying trends due to lower fuel costs.

“You are seeing the industry mix shift a bit, but not to the extent you did in years past when gas prices went down, because consumers are much smarter now,” he tells WardsAuto at a media event here. “They’ve seen gas prices go up and they have seen them go down.”

Fields says lower gasoline prices are a positive for consumers, but long term it’s not going to change their desire for more fuel-efficient vehicles. Rather, it provides them with more purchasing power.

Long term, Ford predicts gasoline prices will go up, but they will remain low for a greater period of time than the automaker had projected, Fields says.

“We (believe) the price of oil will continue to go up,” he says. “We’ve ratcheted (our near-term forecast) down in light of the recent dynamics, but our point of view is still that the cost of a gallon of gas is going to go op over time, so it doesn’t change our plan.”

Some industry pundits say falling fuel prices will accelerate the recent consumer trend of moving from cars to CUVs and SUVs. While that migration may continue in the U.S., Fields says Ford is not going to pull back on its commitment to cars.

“We’re thinking like a global automaker,” he says. “When you look at the car segment around the world, it’s the biggest and where the biggest growth is coming from in emerging markets. We not only have to take a regional look, but also a global look and look at those dynamics in how we grow the business over time.”

Although the lower costs are not going to change future product plans, Fields says the effect of falling pump prices will be a topic of discussion during the midterm review U.S. CAFE regulations set for 2017.

“We think (the midterm review) is a great opportunity to talk about the feasibility and the timeframe to meet those requirements,” he says, noting Ford is on track to hit the 54.5 mpg (4.3 L/100 km) requirement in 2025. “What I expect is we’ll have a very robust midterm review and be very data driven around it.”

Plans call for the introduction of 12 new performance vehicles through 2020, including the worldwide launch of the Focus RS, previously reserved for European markets.

Performance buyers typically earn more money and are better educated than normal consumers, and are willing to pay for vehicles they deem segment leading.

“It’s a positive contributor, and that’s why we think it’s really positive that we take all our performance assets around the world and apply our One Ford philosophy,” he says. “That will allow us to bring out new products faster and meet demanding requirements.”

Fields declines to reveal how many Lincolns were sold in China in November, but says having two dealers already in the top 10 speaks to the opportunity available to the luxury brand.

“We opened four dealerships in November and two cracked the top 10 in terms of Lincoln sales globally,” he says. “It’s not inconsequential when you look at some of our top dealers.”

Lincoln launched in China with two products, the MKZ midsize sedan and MKC CUV. Fields says the MKC accounted for 70% of deliveries in November.