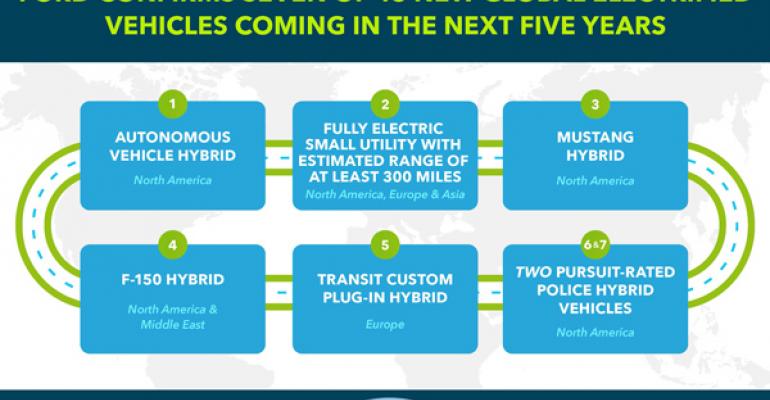 Ford embraces electrification in a big way, announcing plans to invest $4.5 billion in 13 electrified vehicles by 2020, including $700 million in the next four years to expand its assembly plant in Flat Rock, MI, to build EVs and autonomous vehicles.

“As more and more consumers around the world become interested in electrified vehicles, Ford is committed to being a leader in providing consumers with a broad range of electrified vehicles, services and solutions that make people’s lives better,” Ford President and CEO Mark Fields says at a press event at the Flat Rock plant today.

“Our investments and expanding lineup reflect our view that global offerings of electrified vehicles will exceed gasoline-powered vehicles within the next 15 years,” Fields says.

Fields detailed seven of the 13 EVs Ford plans to introduce in the next five years, including three built at Flat Rock: a global electric CUV with an estimated 300-mile (483-km) range arriving by 2020; a Mustang hybrid debuting in 2020; and an autonomous vehicle designed for commercial ride hailing or ride sharing debuting in 2021.

Plans also call for an F-150 hybrid, built at Ford’s Dearborn Truck Plant and available by 2020, a Transit Custom PHEV available in 2019 in Europe and two hybrid police vehicles rated for high-speed pursuit.

Ford is testing its next-generation EV technology this year with a fleet of Transit Custom PHEVs in Europe along with tests of Transit Connect hybrid taxis in the U.S.

The company also is investing in EV services such as fleet management, route planning and telematics and is supporting efforts to expand EV charging capabilities in the U.S. and Europe.

In addition to growing the Dearborn automaker’s EV portfolio, the move involves canceling plans to invest $1.6 million to build a new plant in San Luis Potosi, Mexico. The plant had been slated to build the next-generation Focus and a series of compact EVs.

Instead, those dollars will be channeled to Flat Rock to build the EVs, while Focus production now at Michigan Assembly in Wayne, MI, will move to Ford’s existing plant in Hermosillo, Mexico, clearing the way for production of the Bronco SUV and Ranger pickup at the Michigan plant.

As a result of the investment, Ford will add 700 jobs to staff its new Manufacturing Innovation Center at Flat Rock Assembly Plant to build the electric CUV and autonomous vehicles. The plant will continue to build the Mustang and Lincoln Continental.

“I am thrilled that we have been able to secure additional UAW Ford jobs for American workers,” says Jimmy Settles, UAW vice president-Ford. “The men and women of Flat Rock Assembly have shown a great commitment to manufacturing quality products, and we look forward to their continued success with a new generation of high-tech vehicles.”