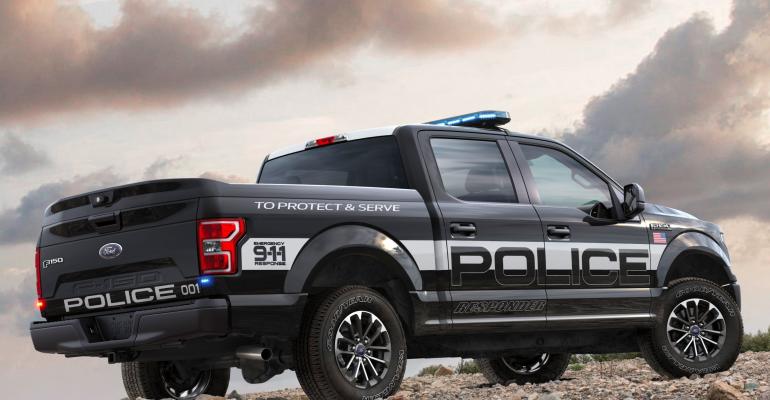 With the broadest lineup in the industry, Ford expects its police-vehicle market segment to soar further with the addition of the&rsquo;18 Ford F-150 Police Responder.

DETROIT – Much as consumer demand is shifting away from cars to trucks and SUVs, so has the law-enforcement vehicle market.

Ford saw the transition between 2012 and 2016, when its police vehicle sales changed from a majority of sedans to 75% utility vehicles, says Tony Gratson, national-government sales manager.

“People started migrating toward the (Police Interceptor) utility because it was easier to get in and out of, had more space and it drove more like a sedan,” Gratson says. “It became the vehicle of choice.” Gratson also says the Explorer all-wheel drive was a big factor for the change.

The F-150 Police Responder is capable of speeds up to 100 mph. It features a powerful 3.5L EcoBoost V-6 mated to a Ford SelectShift 10-speed automatic transmission, with an all-wheel drive for all-terrain performance.

Ford claims 60% of the police-vehicle market.

“If you drill that down to pursuit-rated police vehicles, our market share actually approaches 70%, meaning seven out of 10 belong to Ford,” says Michele Bartlett, general manager-commercial government fleet sales at Ford.

Ford says it has the broadest lineup of law-enforcement vehicles in the industry.

“The police segment has always been a very important segment for us,” says Bartlett. “

The law-enforcement segment encountered a severe drop from 60,000 vehicles annually in the early 2000s to 40,000 vehicles during the recession. Ford says the segment is on a come-back.

The F-150 Police Responder goes on sale next spring.