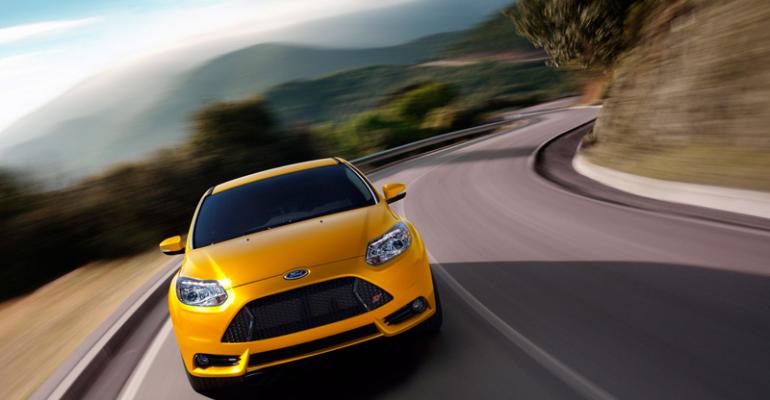 Overboost is designed to extend the peak torque of the Focus ST&rsquo;s 2.0L direct-injected turbocharged 4-cyl. engine for 15 seconds at a time when at full throttle.

Ford is betting tech-savvy new-car shoppers will be drawn in by the “overboost” feature in its upcoming Focus ST performance car.

Overboost is designed to extend the peak torque of the Focus ST’s 2.0L direct-injected turbocharged 4-cyl. engine for 15 seconds at a time when at full throttle.

Torque normally begins to dial back as the wastegate starts to bleed off boost pressure at 3,000 rpm. The overboost feature extends the peak another 1,500 rpm, squeezing nearly 10% more torque – and attendant acceleration – from 3,000 to 4,500 rpm, Ford says. Fuel cutoff is set at 7,000 rpm.

“Instead of torque dropping off a cliff, it’s sustained,” Lisa Schoder, Ford Focus ST marketing manager and an engineer by training, says of the overboost technology.

The main target customer for the Focus ST is male and college-educated, with a strong technological background.

“They’re dying to know about the nitty-gritty details,” Schoder says. “The (demographic) skews toward engineers who want to know everything about (the car).”

The 2.0L EcoBoost, which produces 252 hp and 270 lb.-ft. (366 Nm) of torque in the Focus ST, is the same 4-cyl. found in other Ford products, including the Ford Explorer SUV and Edge cross/utility vehicle.

No upgrades were made to the turbo in order to sustain torque, Schoder tells WardsAuto. Rather, it was discovered during development of the Focus ST that the turbo could handle greater loads than it does in other applications.

In testing the long-term effect the increased torque load would have on the unit, Schoder says Ford “threw the kitchen sink” at the Focus ST’s Ecoboost engine.

“We’ve gone through all the standard durability tests, above and beyond what normal customers would experience,” she says. “The turbo, itself, is specified for sustained, high-output performance, but they’ve programmed the car’s computer to dial in more boost past 3,000 rpm to give it that extra something.”

Overboost is available only for 15 seconds at a time, which Schoder says is more than enough. If the pedal is held down continuously, the car’s control systems will detect if the turbo temperature is rising too rapidly and shut down the feature.

The Focus SVT, offered from 2002-2004 and featuring crisp handling and a spirited 170-hp 4-cyl. engine, served as a source of inspiration for the Focus ST development team.

“The tuning is such that the ride is very controlled, yet in an everyday driving situation it’s not abusive,” Schoder says of the ST. “The performance is great when you want it, but if you’re just cruising around the city it’s not in your face.”

Unlike the Focus SVT, which was sold only through specially certified dealers, all Ford stores will offer the Focus ST.

Production of the car begins later this summer at Ford’s Wayne, MI, plant, with the first units expected to arrive in early fall. Schoder says sales should hit 50,000-60,000 units per year globally.

The Focus ST starts at $24,495 including destination and delivery charges.