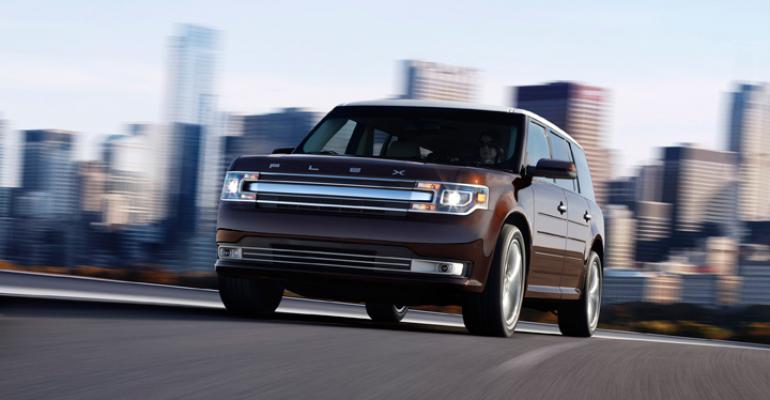 The CUV&rsquo;s one-of-a-kind design resonates with some, specifically married, college-educated women whose annual earnings hover near or above $100,000.

PORTLAND, OR – The Ford Flex appears to be the best-kept secret in the U.S. marketplace.

Demand for the quirky cross/utility vehicle trails the sales rate for the segment in which it competes, according to WardsAuto data. But consumers who have pulled the trigger on a Flex purchase are among the most contented in the nation.

“There is nobody more satisfied with a vehicle than a Flex customer,” says Amy Marentic, Ford group marketing manager.

This would be an idle boast but for supporting data from San Diego-based Strategic Vision. According to the research firm’s Total Value Index, which gauges consumer sentiment on 442 vehicle attributes, the Flex is the market’s favorite midsize CUV.

Critics have slammed its boxy styling. But apparently such one-of-a-kind design resonates with some – specifically married, college-educated women whose annual earnings hover near or above $100,000.

Additionally, Flex buyers tend to be more affluent than the average Ford customer, a predictable demographic, because a well-equipped version of the CUV tops out at more than $50,000.

Strategic Vision’s research shows most Flex buyers are college graduates who earn more than $98,000 a year.

Arguably, the most significant observation about the Flex cult is that many had never darkened the door to a Ford showroom.

“One out of two (Flex buyers) has never driven a Ford before,” Marentic says during a media preview here, adding seven out of 10 then stay with the brand.

Against this backdrop, the vehicle’s market performance has been lackluster. Deliveries totaled 27,428 in 2011, a 19.9% plunge from 2010, while same-period sales of the large CUV segment in which the Flex competes ticked up 3.4%, according to WardsAuto data.

Marentic is unfazed, noting the auto maker does not spend a lot of money marketing the Flex.

“It really sells on word of mouth,” she says. “Volumes are sustainable at this level.”

To enhance handling, the steering ratio is quickened and spring and damper rates are retuned. A new brake system with a larger master cylinder and higher boost improves stopping, Ford says.

The Flex is one of the first Ford vehicles to be shipped with an updated version of MyFord Touch. The infotainment system’s first generation has been slammed for being confusing and slow to respond.

The absence of a blue bade on the vehicle’s grille is the most noticeable change. “(Customers) said they would really like us to take the big oval off the front,” Marentic says. “It was huge.”

The Flex name now is spelled out in large letters across the top of the deck lid. A small Ford oval is located at the rear.

Edwards says he has no data indicating Flex buyers dislike the Blue Oval badge, but warns such moves carry risk. “You don’t want to kill too much of your heritage.”