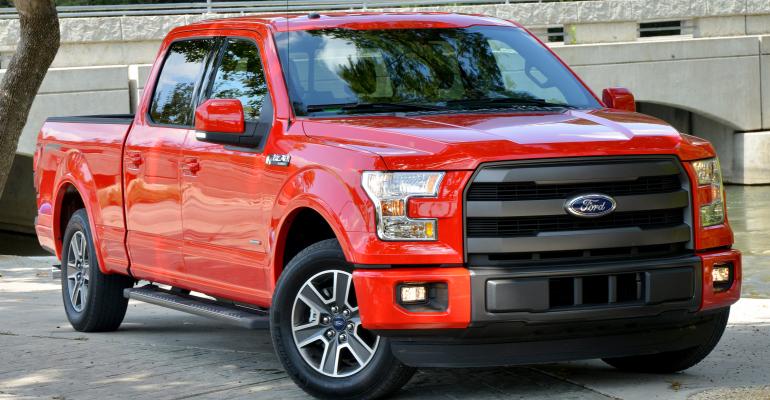 Ford continues to carefully balance F-150 inventories during a changeover to the current model to the all-new aluminum-intensive version due in the fourth quarter, a necessary strategy that largely led to 2.0% year-over-year sales decline in October.

F-Series deliveries dipped 1.5% vs. year-ago to 58,222, according to WardsAuto data. John Felice, vice president-U.S. Marketing, Sales and Service, says the management of F-Series inventory combined with an intentional pullback on daily rental sales led to the overall decline.

But better days are ahead for the F-Series, Felice says, noting strong initial interest for the new model.

“Just over 179,000 people have priced and configured a new F-150 online,” he says in a conference call with analysts and journalists to discuss October sales. “We also had more than 200,000 people provide contact information to receive new (F-150) information. While this doesn’t represent sales, it’s the largest number of hand-raisers we’ve ever received in a month.”

According to insurer AAA, the average costs of a gallon of regular gasoline is $2.98, $0.27 less than a year-ago. The low gas prices have provided a boost to utility vehicle sales industrywide, including at Ford, which saw Escape and Explorer deliveries rise 11.9% and 7.9%, respectively.

The performance marks the Escape’s best-ever October performance and the Explorers best tally for the month since 2004.

“Utilities and truck sales have been very positive and we expect that to continue in a low-fuel price environment with interest rates that are very attractive to customers.”

While moderate fuel prices helped truck and utility vehicle deliveries, it may have hurt models on the other side of the spectrum. Ford small-car sales were hard hit in October, with Focus and Fiesta down 9.1% and 16.3%, respectively.

“Lower fuel prices have had somewhat of a negative impact on small cars, particularly the B- and C-segments,” Erich Merkle, Ford’s top U.S. sales analyst, says. “But we’ve been in this trend toward utilities for quite some time, even when gas prices were higher. We expect utilities to be a significant chunk of the industry for a good number of years.”

Mustang deliveries dove 34.0% in October compared with like-2013 to just 4,565. Felice says the decline is due to the ongoing changeover to the all-new ’15 model, which has been well received by customers.

“Mustang (sales) are building as we continue to ship cars to dealers,” he says. “We’re working to get more stock. They’re turning in just six days.”

Other models posting a strong October performance include the Expedition fullsize SUV, up 18.0%, the Flex fullsize CUV (up 4.5%) and the Transit Connect small commercial van (up 28.3%).

The all-new Lincoln small CUV had a solid month with 2,197 deliveries. Joining it was the recently refreshed Navigator fullsize luxury SUV, which posted a 38.4% year-over-year jump.

The Lincoln MKZ midsize sedan’s 13.7% dip is a blemish on otherwise strong results from the luxury lineup, although Felice downplays the significance of the falloff.

“We’re pleased with the month for Lincoln,” he says. “The MKC is off to great start and the new (marketing) campaign has been well received. It’s the right product in the right segment.”