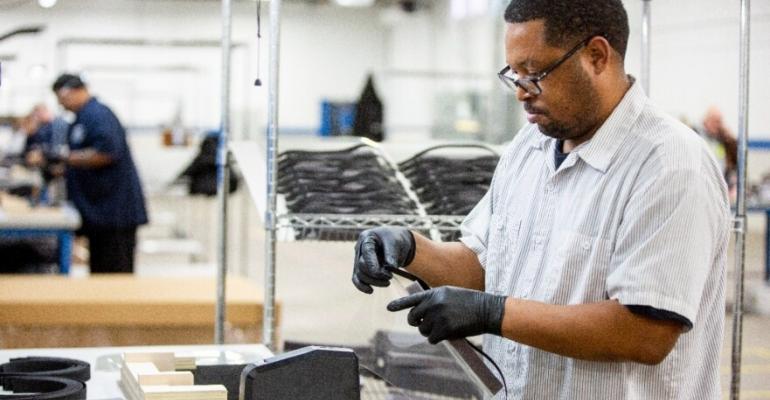 The automaker has partnered with companies including 3M and GE Healthcare in lending its manufacturing and engineering expertise to expand production of urgently needed medical equipment and supplies.

Ford joins the battle against the spread of COVID-19 on several fronts, diverting parts used in F-150 pickups to respirator production, drafting plans to make more than 100,000 face shields a week and using its 3D printing capabilities to produce components for personal protective equipment.

The automaker has partnered with companies including 3M and GE Healthcare in lending its manufacturing and engineering expertise to expand production of urgently needed medical equipment and supplies for healthcare workers, first responders and patients fighting the COVID-19 coronavirus.

“This is such a critical time for America and the world. It is a time for action and cooperation,” Executive Chairman Bill Ford says in a news release. “By coming together across multiple industries, we can make a real difference for people in need and for those on the front lines of this crisis.”

Ford employees are working with 3M to increase the manufacturing capacity of their powered air-purifying respirator (PAPR) designs and jointly developing a new design leveraging parts from both companies to meet the surging demand for first responders and healthcare workers. This new respirator could be produced in a Ford facility by UAW workers, the automaker says.

Ford and 3M teams have been repurposing off-the-shelf parts such as fans from the F-150’s cooled seats for airflow, 3M HEPA air filters to filter airborne contaminants such as droplets that carry virus particles, and portable-tool battery packs to power the respirators for up to eight hours.

The new-generation PAPRs could be built in one of Ford’s Michigan manufacturing facilities, helping 3M boost production potentially tenfold, the automaker says. 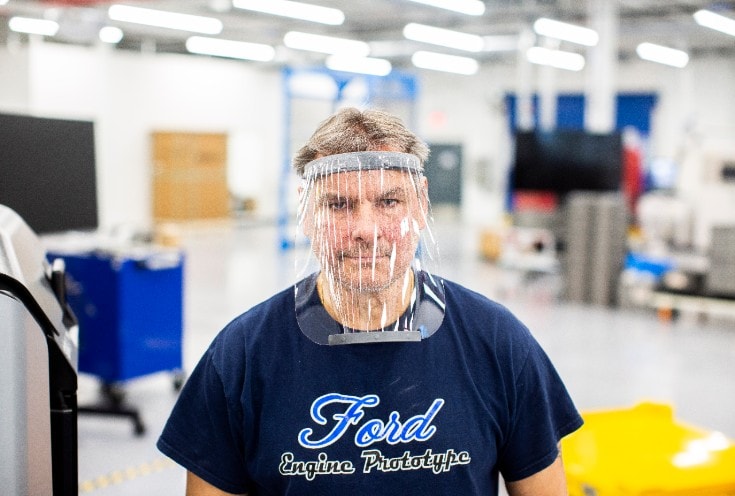 “Working with 3M and GE, we have empowered our teams of engineers and designers to be scrappy and creative to quickly help scale up production of this vital equipment,” says Jim Hackett, Ford’s president and CEO.

“We’ve been in regular dialogue with federal, state and local officials to understand the areas of greatest needs. We are focusing our efforts to help increase the supply of respirators, face shields and ventilators that can help assist health care workers, first responders, critical workers as well as those who have been infected by the virus.”

Ford and GE Healthcare are working together to expand production of a simplified version of GE Healthcare’s existing ventilator design to support patients with respiratory failure or difficulty breathing caused by COVID-19. These ventilators could be produced at a Ford manufacturing site in addition to a GE location.

Meanwhile, Ford designers are creating and starting to test transparent full-face shields (above, left) for medical workers and first responders. The shields fully block the face and eyes from accidental contact with liquids and, when paired with N95 respirators, can limit potential exposure to coronavirus more effectively than N95 respirators alone.

The first 1,000 face shields will be tested this week at Detroit Mercy, Henry Ford Health Systems and Detroit Medical Center Sinai-Grace Hospitals. About 75,000 shields are expected to be finished this week and more than 100,000 will be produced weekly at Ford subsidiary Troy Design and Manufacturing’s facilities in Plymouth, MI.

Ford is leveraging its Advanced Manufacturing Center in Redford, MI, and in-house 3D printing capabilities to produce components and subassemblies for use in personal protective equipment.