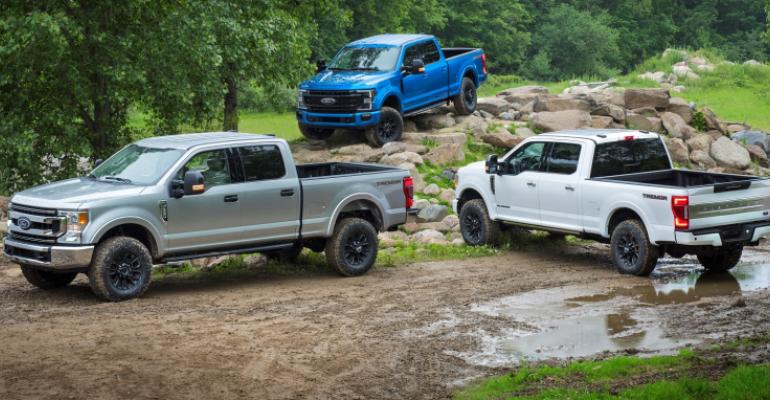 Ford
Pricing for the Tremor package won’t be released until closer to the official launch later this year.
Industry

The off-road package should enable Ford to capture some of the revenue customers now spend in the aftermarket, says Brian Rathsburg, Super Duty marketing manager.

Ford is adding an off-road package aimed at consumers who use the big Super Duty pickup truck for fun as well as work.

Ford’s research shows a significant percentage of Super Duty buyers turn to the aftermarket to customize their vehicles and many of them purchase accessories for off-roading, according to Brian Rathsburg, Super Duty marketing manager.

The Tremor package, which will be available on the ’20 Super Duty this fall, enables owners to combine weekday work and weekend adventures with an upgraded suspension, running boards and the payload capability they expect, Rathsburg says.

“The package is strictly functional,” he adds.

The off-road package should enable Ford to capture some of the revenue customers now spend in the aftermarket, Rathsburg acknowledges. While the majority of Super Duty trucks, the largest pickups Ford sells, are used for work in ranching, farming or mining and by utility companies, there are customers who spend between $2,000 and $10,000 to accessorize the truck.

“A growing number of Super Duty customers use their trucks for more than work,” says Todd Eckert, marketing manager-Ford truck group. “They’re fishing, camping and towing boats on weekends and they go off-road, so we designed this truck specifically for them – more ground clearance, bigger shocks, bigger tires and more off-road capability.

“Tremor balances what customers demand in terms of work with what they need in the great outdoors.”

Pricing for the Tremor package won’t be released until closer to the official launch later this year, Ford says.

As part of the Tremor package, the Super Duty will be outfitted with Trail Control, while a special rock-crawl mode is included in the truck’s first-ever selectable drive modes (see photo below). Tremor also boasts best-in-class water fording of 33 ins. (84 cm).

The selectable drive modes include normal for around-town use, tow/haul for optimized performance under load, eco for enhanced fuel economy, slippery for icy conditions and deep snow/sand for low traction. 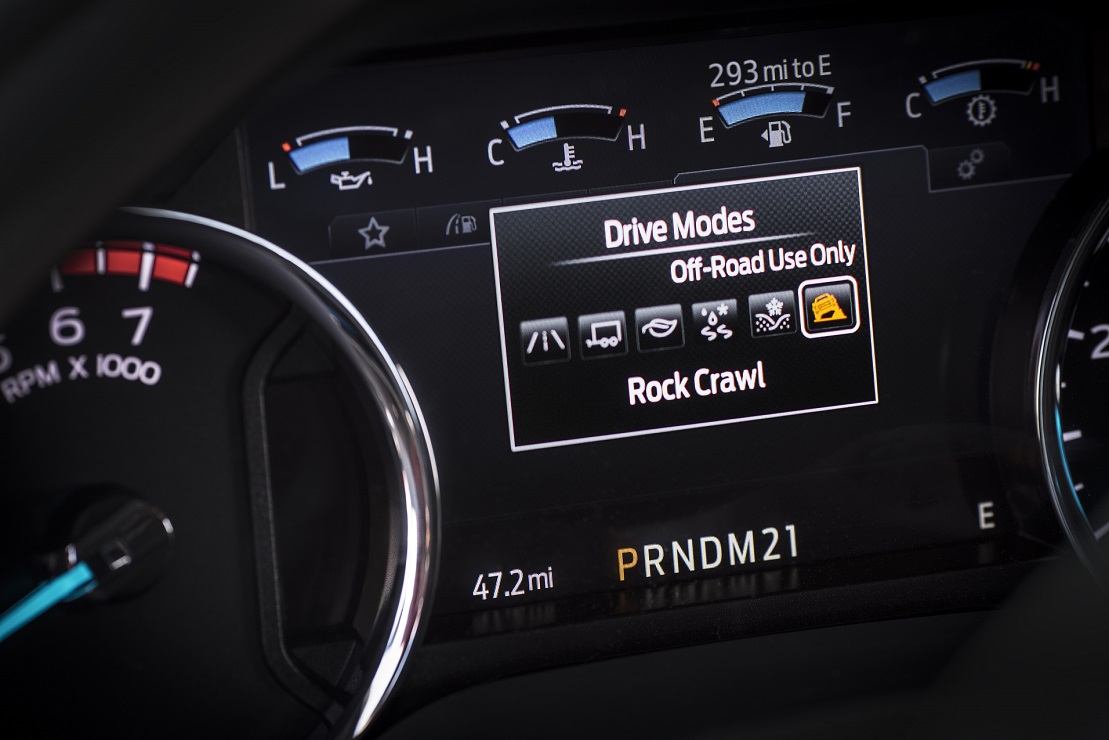 Towing and payload ratings will be similar to those of non-Tremor models, say Ford officials who claim the Super Duty will deliver greater towing and payload capacity than the Ram Power Wagon.

The package will be available on the XLT, Lariat, King Ranch and Platinum F-250 and F-350 Super Duty trim levels with an all-new 7.3L gasoline V-8 or third-generation 6.7L Power Stroke diesel V-8 with 10-speed transmission, Ford says, but not on the base model ordered by many fleet customers.

The tires, combined with a 2-in. (51-mm) front-end lift and shorter air dam, result in 10.8 ins. (274 mm) of ground clearance and the best approach and departure angles of any Super Duty ever – 31.65 degrees and 24.51 degrees, respectively, to ensure the truck can handle rugged terrain.

The rear stabilizer bar is tuned for a lower spring rate so customers experience less head toss over obstacles during severe suspension articulation.

At very low speeds, they are tuned for soft damping, which is dialed up for control over more severe impacts. Internal hydraulic rebound helps soften the blow of the hardest hits.

The Tremor uses a locking rear differential with electronic shift-on-the-fly engagement and a new Dana limited-slip front differential. In certain modes, the front axle can sense when a tire has lost traction and uses the brakes to send power to the wheel with traction, Bresky says.

Additional hardware includes extended-axle vent tubes, skid plates fitted to FX4 models and off-road running boards that tuck up next to the body for damage control.

For the first time, the Super Duty gets Trail Control, a feature that debuted on the F-150 Raptor and Ranger. It functions like cruise control for off-road driving in any mode.