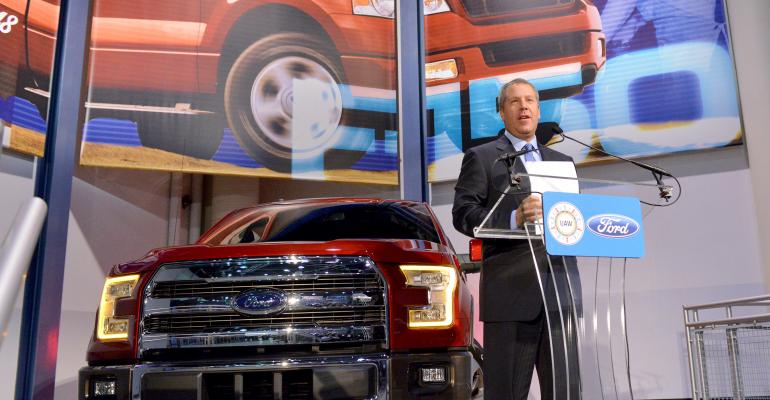 Ford bringing some work for new F-150 in-house, including stampings and subassemblies.

The new workers already are undergoing training at the Dearborn Truck Plant, as well as a stamping facility and the automaker’s diversified plant, which makes a number of components for the pickup.

Bruce Hettle, vice president-North America Mfg., says many of the new positions were needed because of work brought in-house to build the new F-150.

“On the current model truck a number of the body components, including the stampings and subassemblies, we’re done by outside suppliers,” he tells WardsAuto at a media event here. “When we made the decision to go to an aluminum body we felt it was important strategically to bring that content inside so we could control the design, manufacturing technology and overall quality of the product.”

Production of the F-150 is expected to begin in the coming weeks, with sales scheduled to commence in the fourth quarter.

Joe Hinrichs, president-The Americas, says it took a massive undertaking to convert the assembly and stamping facilities to accommodate the aluminum truck.

The body shop was built in pieces and stored in facilities throughout Southeast Michigan, and over the course of four weeks, 1,100 trucks hauled in the new equipment at DTP.

“We couldn’t afford to shut the F-150 plant down,” he says. “We tore down those components and shipped them in here to put it in place. That way we didn’t lose as much production.”

Hinrichs says for the most part assembling the truck will be similar to building a steel-bodied vehicle, with a few exceptions, including stamping and body work.

“The stamping process is different, and in the body shop there is riveting and bonding opposed to welding, “he says. “It’s a different metal, so the process in the paint shop (also differs).”

Hinrichs brushes aside criticism that the automaker’s plans for the F-150 are too ambitious and that it is ill-prepared to handle such a massive launch without stumbling.

Validation of the assembly process and the finished product is ongoing, and everything has proceeded smoothly, he says.

“Every new model launch has issues, but this launch is going according to plan,” Hinrichs says. “This is an ambitious project. It takes a while to convert from steel to aluminum, and with such an important product we had to make sure that we had everything right before we started accelerating.”