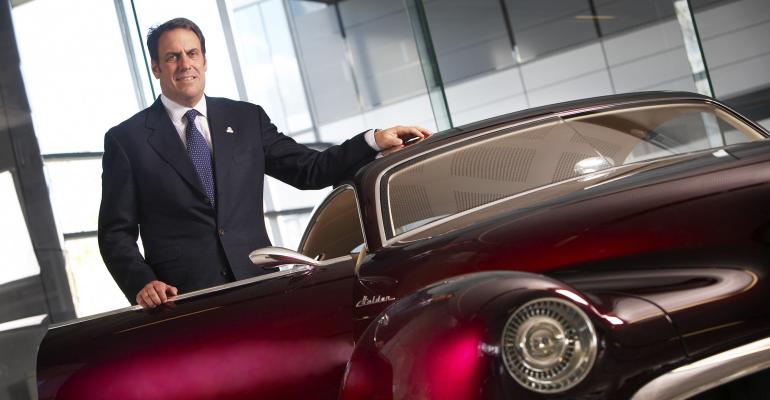 MILFORD, MI – Much of General Motors’ future will depend on new vehicle-architecture strategy that not only will result in a bevy of new models, but become the centerpiece in a drive to improve efficiency, increase margins, unlock greater pricing power and polish relationships with key suppliers, top-ranking executives say.

In outlining the game plan for market analysts here on Wednesday, product-development chief Mark Reuss says the automaker will debut the first of four new vehicle component sets in 2020 and complete the rollout in 2025, but elements of the new architectures will appear in production vehicles ahead of those dates.

The concept is similar to the one Volkswagen uses with its MQB architecture, which is expected to account for production of some 6 million vehicles annually. It will allow models across size segments to share parts and provide complete flexibility for a range of engines, including electric or hybrid powertrains.

But Reuss says there are key differences in GM’s engineering philosophy that he believes will give it a leg up in matching vehicles more perfectly with local market demands for fuel-efficiency and safety worldwide and allow the automaker to plan parts sourcing in a more strategic, cost-effective way.

Next year, GM expects to have 14 core platforms and 12 regional architectures in play. That will decrease to 11 core and two regional platforms, plus the two Vehicle Set Strategy (VSS) component-based architectures in 2020, before going solely to four VSS platforms in 2025.

The four platforms will encompass one each for front- and rear-drive vehicles, SUVs and trucks. Reuss does not say which of the two will be in production first in 2020.

“We’re designing across segments to get scale we never (had) before,” Reuss says, citing B- and C-segment vehicles that will share common suspension components, for example, but feature different tuning depending on ride and cost targets. “This is the key to unlocking scale and specific customer requirements around the world.”

Coupled with the coming platforms will be new engines, dubbed the CSS family. Reuss says in the past, GM focused on cutting manufacturing costs by having engines of various sizes share bore centers so they could be produced with identical tooling.

But the savings there were minimal, and the philosophy resulted in small-displacement engines that carried extra mass and were not easier to fit under the hood, minimizing fuel-economy and packaging gains that normally would be possible by downsizing.

Instead, the new engines will have optimized bore centers, decreasing weight and size, paving the way for much more dramatic vehicle designs and improving overall driving dynamics.

Reuss also says Cadillac’s upcoming new CT6 flagship sedan will break ground with a multi-material body-in-white that has 20% fewer parts and is 220 lbs. (100 kg) lighter than a comparable steel structure. It is 53 lbs. (24 kg) lighter than the current CTS’s body-in-white, despite the car being 8 ins. (200 mm) longer overall.

GM showed analysts (but not media) here several upcoming new models, including the CT6, which will be available with a plug-in hybrid powertrain that will be rated at 70 mpg-e (3.4 L/100 km) and be available worldwide.

The reduction to four core platforms will give GM enormous pricing power and create program volumes that allow it to forge better relationships with its key suppliers, executives say.

In addition, Reuss says GM no longer will have engineering teams dedicated to wringing costs out of existing models, squeezing margins for suppliers and putting both them and the automaker at risk.

“We had people working on things going out of production,” he says of the misallocation of resources that now will be redirected toward developing all-new models. “We want to (get pricing right) the first time. That’s what we have to do.”

Chief Financial Officer Chuck Stevens says the automaker has developed better cost modeling “to go after opportunities on a win-win basis with suppliers.” He projects a material cost savings of $900 million per year.

CEO Mary Barra expresses confidence the automaker will be able to follow the path from 14 platforms to four in the relatively short time span of 10 years.

“The beauty is (that) a lot of work already has been done as we developed the strategy,” under way for several years, she says. “It’s been very well thought through. I’m very confident (about) the vehicle, powertrain and gearset strategy.”