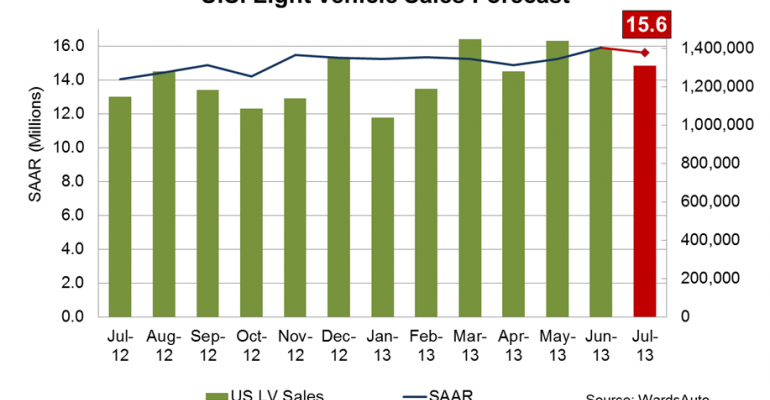 A WardsAuto forecast is calling for U.S. auto makers to sell 1.3 million light vehicles this month, equivalent to a 15.6 million-unit SAAR.

July’s daily sales typically run about 1% higher than June’s in any given year, and early reports indicate high consumer demand for vehicles in the first weeks of the month.

However, LV deliveries in the important final 10 days of July may be hampered by reduced inventories caused by June’s sales spike and reduced production this month.

The housing market continues its strong year-over-year improvement, although it has experienced some hiccups. Sales of new homes climbed 8.3% from May to June, but new housing starts, a key indicator for light-truck demand, fell nearly 10% month-to-month.

Similarly, the sales rate for previously owned homes dipped 1.2% in June compared with prior month, as prices and mortgage rates continued to climb. However, the higher prices boosted the wealth of homeowners and likely contributed to increased consumer confidence.

The WardsAuto forecast calls for General Motors to deliver 235,000 LVs in July, a 7.8% decline in the DSR from June. The prediction is based on lower fleet sales across the industry, plus some inventory issues. Chevrolet’s popular Cruze began July with 39 days’ supply, but production is expected to tumble nearly 50% from recent rates.

Ford also is carrying fairly low inventories on some of its most popular vehicles. The Explorer SUV entered July with 37 days’ supply, and output is forecast to drop 36%. The Fusion midsize sedan began the month with 48 days’, with production expected to fall 20% below recent build rates.

Those challenges, along with the expected decline in industry fleet orders, are holding the WardsAuto forecast for Ford LV sales to less than 190,000 units – a 15.6% reduction in DSR compared with June and a modest 5% gain over year-ago.

Toyota started July with a bang, with reports of particularly strong sales over the holiday weekend. The auto maker should be able to maintain momentum through the end of the month, with an expected 190,000 deliveries, up 1.4% from prior month and 10.8% better than last July.

At forecast levels, Toyota would outpace Ford in monthly LV sales for the first time since September.

Volkswagen is expected to lead all European auto makers with 37,000 deliveries, despite a 4.4% decline in DSR from prior-year.

The WardsAuto July forecast would bring year-to-date LV sales to 9.1 million units, up 8.4% from like-2012.