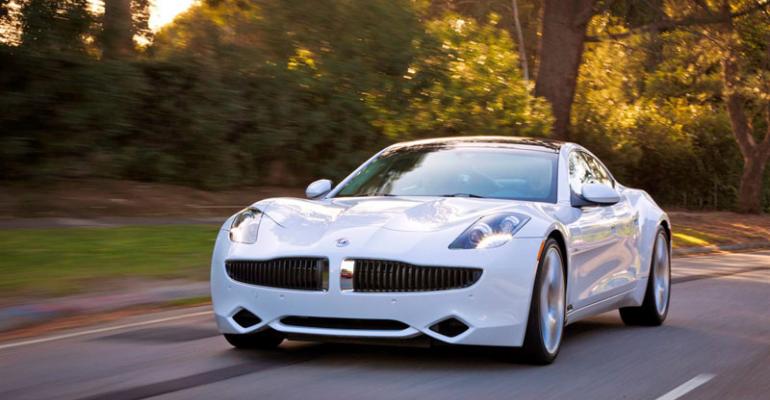 The startup auto maker already has received a federal loan for $193 million to build the Karma plug-in hybrid and has said it requires another $351 million to produce its next model. The DOE has delayed approval of the latter amount.

The privately owned auto maker needs the money to renovate the Wilmington, DE, plant it purchased from General Motors so it can start building its second model, the Atlantic. It also says it will use the funds for sales expansion into the Middle East and China, along with a new global marketing campaign for its Karma extended-range electric vehicle.

Fisker already has received a $193 million federal loan to build the Karma extended-range electric vehicle, and has said it requires another $351 million to produce the Atlantic. The DOE has delayed approval of the latter amount.

The auto maker says in a statement Wednesday it has raised more than $1.2 billion in private equity since the company’s inception in 2007.

“This is another major vote of confidence in Fisker's pioneering technology and business model,” Fisker CEO Tony Posawatz says of the latest equity funding. “We are grateful to both our investors and our initial customers who have supported our company and are quickly becoming our biggest advocates.

“The Karma is already a testament to U.S. automotive innovation and advanced technology, and we intend to announce our production plans for the Atlantic and a timeline by December of this year.”

Fisker says it has sold nearly 1,500 Karma sedans in the U.S. and Europe since the car launched in December, “bringing the company a further stream of revenue and helping to attract new investment interest.”

The Wilmington plant currently is staffed by about 10 caretaker employees who are doing some preparatory work and recycling some robots and skillets that GM left behind, he says.

The Karma is assembled by Valmet in Finland, but 50% of its content is made in the U.S. Datz says it uses many GM parts, including the steering column and generator engine. The headlights are supplied by Visteon.

Fisker was rendered a blow earlier this week when influential Consumer Reports magazine said after test-driving the car that the Karma was “plagued with flaws.”

Fisker said in a statement the magazine appreciated the Karma’s ride, handling and braking and that the auto maker plans to improve the sound quality and touchscreen system.

Says Henrik Fisker, founder and executive chairman of Fisker: "We are now poised to invest in the next generation of extended-range battery-electric luxury cars and another chapter in the fast-paced expansion of Fisker Automotive, and are demonstrating our commitment to long-term success.”