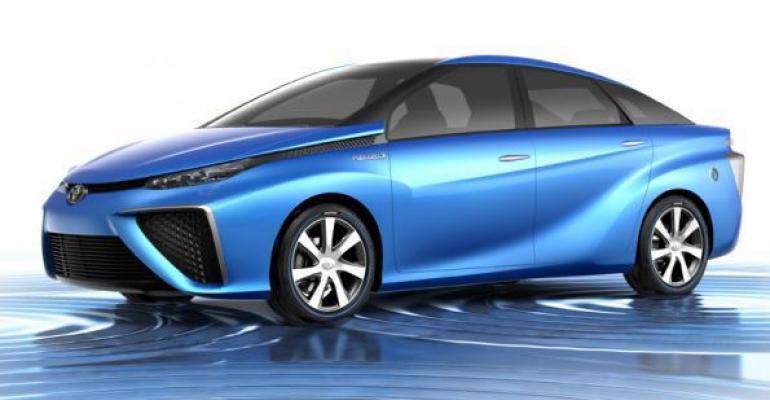 Not surprisingly, the initial FEF hydrogen dispensers mainly will be in major metropolitan areas, with a few exceptions.

“We hope pretty soon after building (our) first 40 (stations), we can demonstrate they’ll be profitable,” Shane Stephens, co-president-FEF, tells WardsAuto on the sidelines of the 2014 Management Briefing Seminars here.

FEF received a grant from California for an initial 19 stations and wants to install another 21 within five years. Companies similar to FEF will add another 15-20 refueling points, he says.

Not surprisingly, the initial FEF hydrogen dispensers mainly will be in major metropolitan areas, with a few exceptions.

The company plans to locate refueling points halfway between Los Angeles and San Francisco and put one near Lake Tahoe, CA, which Stephens and his boss, former Hyundai and General Motors marketer Joel Ewanick, expect to be money losers.

Toyota is set to begin retailing an FCV in California next summer. The state has more hydrogen infrastructure in place than any other, although few pumps are open to the public.

FEF’s initial pumps will be located at existing gas stations due to the public’s familiarity with them.

“We think in the near term this makes the most sense, to make it easy and retail-like,” Stephens tells the MBS crowd Tuesday.

In the future, he says hydrogen dispensers at shopping centers and stores could be viable.

First Element will deliver hydrogen by truck to gas stations and store it in tanks. Stephens and Toyota’s Justin Ward, general manager-Powertrain Systems Control at the automaker’s Gardena, CA, technical center, see this as less risky than tapping into hydrogen pipelines, as that setup could introduce points of possible failure that would hamper or sour the customer experience.

In the alternative-powertrain world, a debate continues over whether FCVs or electric vehicles are the more viable technology.

Ward says Toyota cares about the well-to-wheel nature of its FCVs and hopes to see more renewably sourced hydrogen, such as that from sewage sludge, “because we’re always going to have that.”

Most hydrogen today is reformed from natural gas, using steam to extract hydrocarbons, a process that many environmentalists claim is too energy-intensive.

While FEF is starting in California, it sees its business model as “scalable and exportable” to other states, particularly New York. Many northeastern U.S. states have adopted emissions regulations similar to California’s.

Meanwhile, Toyota is attracting hand-raisers for its vehicle, hinted at in the FCV concept from last year’s Tokyo auto show.

The automaker has released an exterior photo of the production model, arriving in Japan in April ahead of its summer 2015 U.S. launch, but has not given many other details, beyond the car’s estimated range of 300 miles (483 km).

The production FCV will have hydrogen tanks made by Toyota. Ward says the automaker has found suppliers’ tanks to be too costly for production cars, with spotty quality. Production also was limited by a process similar to “hand-made work.”

Toyota earlier this year announced the car in Japan would be priced at ¥7 million ($70,000). No U.S. pricing has been announced, but Toyota at one time talked about a starting price of $50,000.

Initial U.S. units will be leased, although Ward says Toyota hopes to sell them eventually, too.

Rival Hyundai in June began leasing its Tucson fuel-cell CUV for $499 per month in select parts of California, a price that includes unlimited fuel.