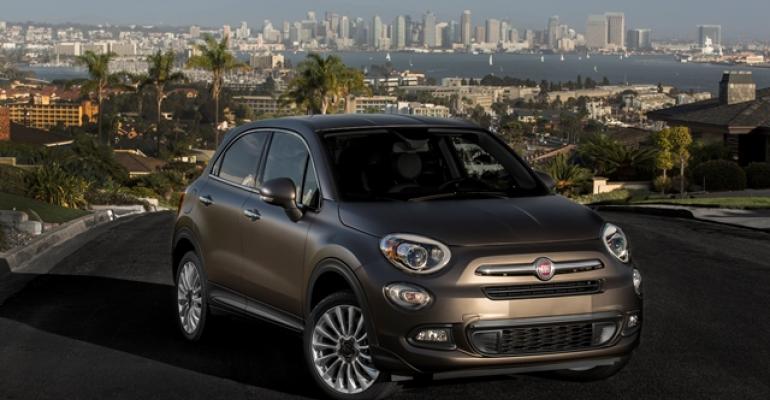 The Fiat 500X resides in the Small CUV segment, expected to be among the fastest-growing sectors in the U.S.

LOS ANGELES – Fiat has high expectations for the all-new ’16 Fiat 500X CUV, which it says will be the volume player in its 4-vehicle lineup.

“The icon, or Mother Goose (of Fiat), is the (500) hatch that will always be the icon,” Jason Stoicevich, head of Fiat Brand for North America, tells WardsAuto at a media event here. “(But) We’re going to sell a ton of (500Xs).”

Sharing a platform with the Jeep Renegade CUV, the 500X is the first U.S. Fiat offering with optional all-wheel drive, which Stoicevich says has been demanded by customers, particularly those in inclement regions.

“When you look at the competitive set and the AWD percentage mix, in some cases it’s as high as 70%,” he says. “That’s why it’s important. Consumers have spoken and said, ‘I want this car in this package.’”

The 500X resides in the Small CUV segment, expected to be among the fastest growing sectors in the U.S. Competitors include the upcoming Mazda CX-3, Honda HR-V, Nissan Juke and Mini Countryman.

Fiat predicts the segment will grow 230% between 2014 and 2020, with many consumers coming out of CD-segment sedans, as well as midsize and fullsize CUVs and SUVs.

“A lot of the (new small CUVs) are coming at the exact same time, and there’s more coming,” he says.

The Fiat 500X is expected to serve as the halo of the showroom, although being a larger vehicle than the base 500 it has more in common with the 500L, which largely has been a disappointment.

The 500L suffered from poor third-party reviews, most of which centered on its abruptly shifting dual-clutch transmission. With a limited showroom, the 500L’s poor scores from outlets such as J.D. Power dragged down the entire Fiat brand.

Stoicevich says a new 6-speed automatic transmission has been added to the 500L, which should alleviate consumer concerns.

“Unfortunately, when your volume is what it is and you have two cars, and one gets bad reviews, it’s easy to get down there,” he says. “We put so much time and effort into the X from a quality perspective we expect to improve those scores very quickly.”

Stoicevich says he expects little cross-shopping between the 500L and 500X, noting they are designed to attract unique customers.

“If you have a family or you’ve got some cargo to carry, (the 500L) becomes more of a family vehicle for us,” he says. “The 500X is not necessarily a family car, it’s much more about that sportiness and driving dynamics.”

Stoicevich also says the 500X was designed with the North American market in mind, while the 500L is more Eurocentric.

The 500X also comes with a Dynamic Selector system, which allows the driver to choose from Auto, Sport or Traction+ settings.

Stoicevich says he hopes the 500X will spark Fiat’s overall sales, which have been affected by low gasoline prices and increased competition.

“We’ve cracked 50,000 (units) over the past three years, and I definitely need that to grow,” he says. “We’re grinding pretty hard right now and I expect you’ll see significant growth in the second half of the year.”