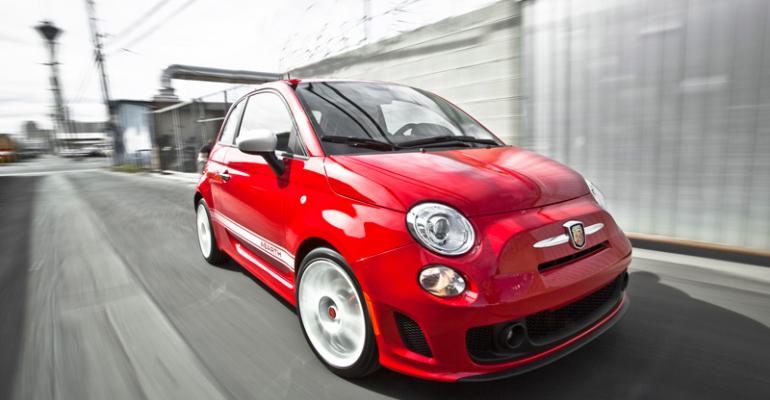 The Italian auto maker&rsquo;s U.S. president credits the resurgence to multiple price ranges and body styles of its 500 subcompact.

After a slow start, Fiat’s calculated return to North America appears to be gaining traction.

The 500, classified as a small specialty vehicle by WardsAuto, has grown steadily in sales each month since its U.S. debut in 2011. For a brand with past failures etched in the minds of an older generation and still relatively unknown to the youngest generation of car buyers, that’s a huge victory.

Experienced drivers are giving Fiat a second look in the wave of downsizing and fuel-saving trends, the brand’s top U.S. official tells WardsAuto.

“Everybody asks me, ‘Are your sales tied to fuel economy?’ Fuel economy is going to be a driving factor,” Tim Kuniskis, president-Fiat USA, says.

Fiat sold 19,769 500s in 2011, according to WardsAuto data. The Italian auto maker already has surpassed that number during the first eight months of this year with 28,566 deliveries.

Kuniskis also credits the 500’s success to its growing range of powertrains and body styles. The 500 has swiped sales from BMW’s Mini, he says, because of offerings like the top-performance Abarth, high-end Gucci edition and open-top Cabrio, which Fiat says is its highest-selling model in the U.S.

“From a share perspective, we do extremely well. Our (subcompact) market share is about 11%,” Kuniskis says. “While it seems new to the U.S, it’s a very successful product in the rest of the world.

“Look at the subcompact segment: It’s 4% of the industry,” he adds. “That’s kind of tough to take a 4% segment and say we’re going to re-enter the industry.”

In addition to the Mini Cooper, Fiat dealers are seeing Toyota Yaris and Honda Fit small cars, as well as some C- and D-segment vehicles, being traded in on a new 500, Kuniskis says.

“There really is no hard and fast demographic. (It’s) more of a psychographic,” he says. “When you’ve got that small segment, you want to bring in people from the other segments. And you’ve got to give them as many possible slices as possible. By the end of this year, we’ll have nine different variations of this segment.”

The Fiat 500 electric vehicle, due in November, will be the next version of the subcompact to hit the market. Fiat will launch the 500L, a larger, 4-door model, in 2013.

The auto maker has been expanding its dealer base to accommodate the growing demand. There are currently 178 “studios,” mostly in urban areas.

Customer service and the post-dealership experience have been keys to marketing the brand, Kuniskis says. New Fiat drivers are given their dealer’s business cards to hand to admirers who have questions about the car.

Dealers are put through rigorous tests before being granted a franchise. “They have to be an experienced operator,” Kuniskis says. “They have to have the necessary capital and a facility to meet our requirements – size, space, location feel.”

Lisa Copeland, general manager-Fiat of Austin, TX, and chair of Chrysler’s dealer council, says she will expand her showroom as more Fiat and, ultimately, Alfa Romeo models arrive. Fiat CEO Sergio Marchionne has announced plans to return the Alfa Romeo brand to North America alongside Fiat, but has not revealed specific timing or which cars will be offered.

“We have now gone mainstream. Now we have buyers from all walks of life who (had) never heard of the brand, but are now aware of the brand,” Copeland tells WardsAuto. “They don’t know the back story, but they know how well we’ve done since the re-emergence of the brand.”