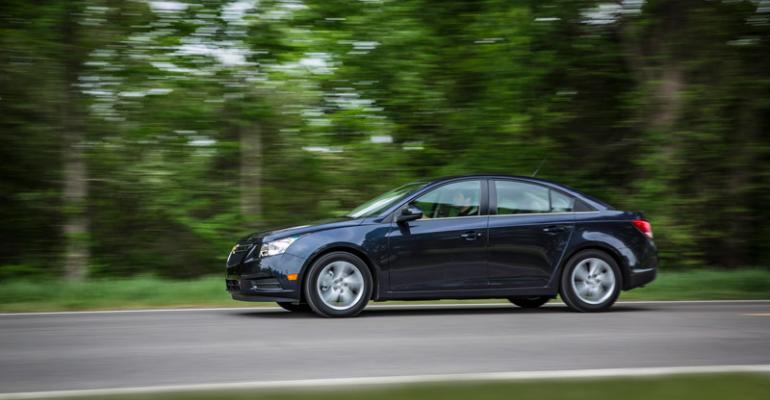 Overall, deliveries totaled 234,071, up 11.7% on a daily-rate basis (one more day this year than last), with all four brands posting double-digit volume increases. Both the car and truck segments recorded gains, with the former up 19.1% daily and the latter rising 7.6% from year-ago.

GM’s closely watched transition to a redesigned fullsize pickup lineup appears to be going smoothly. Sales of the Chevrolet Silverado soared 39.4% in July, while GMC Sierra deliveries shot up 43.4%.

McNeil says 85% of the combined volume of 58,662 fullsize pickups was focused on the outgoing ’13 model.

“That’s per our plan,” he notes in a conference call with analysts and media to discuss the July results, adding current inventories of the older-generation GMT900-based pickups stand at 140,000 units, “exactly on track with our transition plan.”

About 9,000 of the pickups sold in July were the new models, which currently are being offered only as high-content crew-cabs. GM just recently began shipping double-cab models and will begin rolling out regular-cab versions to dealers later this summer. The auto maker already has ended production of the GMT900 light-duty pickups, executives say.

McNeil declines to be specific, but says higher average transaction prices are expected with the new models, as the lineup mix strengthens, buyers continue to select more options and incentives decline.

“We feel like we’re in a very good place,” he says.

GM blames the drop in fleet sales on delayed orders for vans and the lack of a midsize pickup in its lineup, but says its market share in the segment remains up 2.5 points year-to-date. “We’re anticipating getting these (van) orders going forward,” Ed Peper, vice president-fleet and commercial sales, assures.

The Chevrolet Cruze was among the hottest models last month, with sales up 63.4% to 25,447 units, according to WardsAuto data. The tally includes 300 of the new diesel version (identical to June volume), which is drawing in three types of buyers so far, McNeil says.

“The first type of customer who is coming in is looking for a very fuel-efficient Chevrolet, and they aren’t aware of the Cruze diesel at all,” he says. Once they see the 46 mpg (5.1 L/100 km) highway rating and test drive the car, “it’s maybe changed their opinion of diesel and they drive out with (one).

“The other customer is a true diesel-intender, who maybe bought a Volkswagen in the past,” he adds. The third type of buyer is a GM diesel-pickup owner, who until now may not have had a Chevrolet car in his garage.

McNeil estimates GM’s market share at 17% for July, up nearly a half point from last year, and the industry’s strong performance has the auto maker believing entire-2013 sales will finish at the high end of its 15.5 million-unit start-of-the-year forecast.

“We think definitely more room to grow this year,” he says.