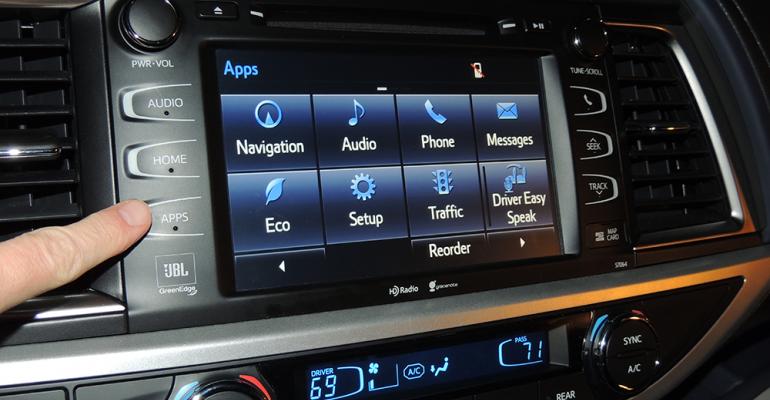 <p><strong>FEV wants to benchmark performance of infotainment systems, such as this one on new Toyota Highlander.</strong></p>
Industry News

<p><strong>There is not necessarily a correlation between a high-priced vehicle and a high-performing infotainment system, FEV says.</strong></p>

DETROIT – With automakers struggling to meet tough fuel-economy and emissions standards looming on the horizon, there is plenty of work to keep powertrain experts at FEV North America busy.

But the engineering services and consulting company is intent on expanding well beyond its work with engines and transmissions into telematics and infotainment, ripe areas for its special talents in testing and benchmarking.

Previously, Hupperich was vice president for the company's Commercial Engines, Advanced Applications and Test Systems strategic business units, where he oversaw the growth and diversification of FEV's large and heavy-duty engine business and FEV’s consulting unit.

“When (FEV) started in 1978, we were focused on the engine, not that that wasn’t exciting, but continuing to grow meant to get into all powertrain components, transmissions and then the whole vehicle side of engineering services.”

FEV also now does a lot of work related to vehicle electronics, so telematics, autonomous driving and car-to-car communications is “the next logical step,” Hupperich says.

Ultimately, FEV wants to become more than an engineering services company. “We want to establish ourselves as more of a partner to our customers rather than just a supplier. We want to help guide them in their product development,” Hupperich says.

Most telling is FEV’s acquisition last year of DGE, a small Rochester Hills, MI, company that specializes in automotive electronic design and telematics.

At the recent SAE World Congress here, FEV showcased DGE’s human-machine-interface test system along with its usual array of imaginative engine and transmission development projects, including a 2-cyl. diesel outboard motor for marine use and innovative hybrid-electric powertrain concepts.

The DGE system introduces an automated, standardized way of evaluating numerous HMI performance factors, a bit of a breakthrough for technology that historically is tested manually.

“A typical challenge is how long does it take for your Bluetooth to connect?” Hupperich says. “We’re looking to find an objective way to benchmark performance of infotainment systems among vehicles very similar to the engine and transmission benchmarking that we already are doing. We believe that has a lot of value to our customers.”

“Everything is based on data. It’s very standardized and precise,” Last says. But in the infotainment and telematics business, most testing still is done by human evaluators, and there is subjectivity from person to person and test to test.

“I think this may have led to some of the variability we found when we started doing benchmarking work. There is not necessarily a correlation between a high-priced vehicle and a high-performing infotainment system,” Last says.

DGE has automated programs that conduct precise and rigorous test protocols that allow an exact measurement of system performance.

“When we couple that with our benchmarking stuff (reports that deliver detailed test results of powertrain evaluations), we knew we had something going on,” Last says. “Now we have something nobody else out there has the ability to do.”