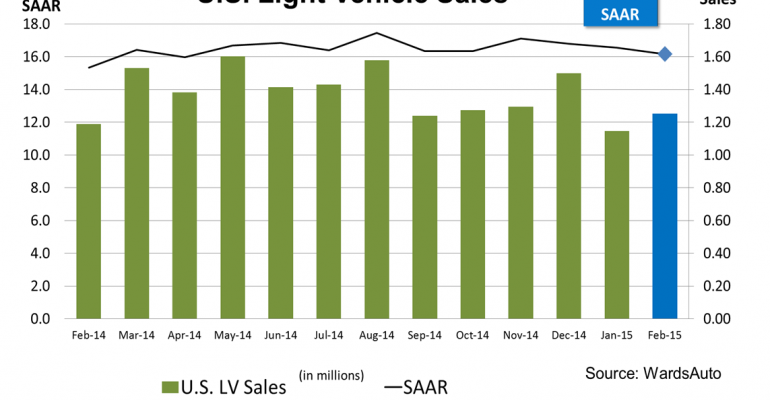 March&rsquo;s results likely will get a slight boost from lost sales in February, barring more bad weather or an increase in inventory shortages.

However, lean inventory of some strong-selling trucks, and automakers exercising discipline by avoiding heavy incentives, also may have been limiting factors.

Nevertheless, the overall results were good. Based on daily selling rates, deliveries increased year-over-year for the 12th consecutive month and 60th time in the last 64 months. February’s volume of 1.252 million equated to a 52,186-unit DSR, 5.4% above year-ago’s 49,502 – 24 selling days in both periods.

Barring more severe weather or an increase in inventory shortfalls, March’s results likely will get a slight boost from lost sales in February.

Despite some inventory-related drags, especially with CUVs, sales gains were marked again by strong truck results.

After achieving the feat in only three other months on record, combined sales of CUVs, SUVs, and pickups topped 50% for the fourth consecutive month. Including vans, February truck penetration was 55.5%, well above year-ago’s 47.5%, and highest ever for the month.

Despite a small upturn in fuel prices in February, following a steep decline that began last summer, sales of large trucks – CUVs, SUVs, pickups and vans – increased 11.1% from year-ago and penetration jumped to 19.4% from 18.4% in February 2014.

Sales of pickups surged ahead of like-2014 as both the small and large segments increased by double digits. Pickup share increased to 14.4% from 13.4% in February 2014.

Small Pickups, on the strength of the all-new Chevrolet Colorado and GMC Canyon, vaulted 58% above year-ago. However, despite older product, Nissan and Toyota are not giving up the ghost as the venerable Toyota Tacoma and Nissan Frontier posted gains of 14% and 5%, respectively, adding to the rejuvenation of the segment, long in decline.

Large Pickup sales rose 8.4% in February, spurred by a robust 24% gain by the Chevrolet Silverado. Notably, Toyota’s other venerable pickup, the full-size Tundra, posted a 14.2% increase in February, better than segment stalwarts GMC Sierra and Ram.

SUVs soared to a 23% year-over-year increase, with double-digit gains in each of the group’s segments. Market penetration climbed to 7.2% from like-2014’s 6.2%

In spite of slim inventory for some traditional strong sellers, such as the Chevrolet Equinox, Ford Edge and Escape, GMC Terrain, Honda CR-V, Hyundai Santa Fe, Nissan Murano and Toyota Highlander, market penetration of CUVs recorded an any-month record share (28.8%) for the second straight time in February. Sales for the segment group increased 8.6% from like-2014.

Luxury Car, with sales up 1.7% in February following three straight declines, was the only car segment group to record an increase over year-ago. Much of that was due to BMW products in the Luxury Specialty segment – 2-, 4- and 6-Series.

Also, Lower Luxury recorded a 5.0% increase, although that was only the third year-over-year increase in the last 14 months for the segment, and largely due to just a few models. One of the Lower Luxury models responsible for higher February sales was the redesigned Mercedes C-Class, which so far this year has usurped the BMW 3-Series as the No.-1 selling luxury car.

Only Ford, Porsche and Volkswagen/Audi recorded declines from year-ago. Each was particularly hurt by cars.

Double-digit increases were made by BMW, Jaguar-Land Rover, Mitsubishi, Subaru, Tesla and Toyota. FCA US posted its 59th straight increase year-over-year, but its 5.6% February gain was its lowest since July 2010. During its streak, FCA’s average year-over-year gain was 19%.

Ford, which lost the No.-2 spot in the market to Toyota for the third time in the last four months, needed a 1.1% increase in truck sales to partially offset an 8.1% drop in cars to keep its overall decline at 2.0%.

Although it posted a 4.2% year-over-year increase in February, cars were a bigger bane to market-leader General Motors. Fortunately, its heavy mix of trucks, led by a 68% increase in its Large and Large Luxury SUVs to go along with its gains in pickups, more than offset a 21% decline in cars.

FCA Sales Rise in February But Weather May Have Limited Gain
Mar 03, 2015