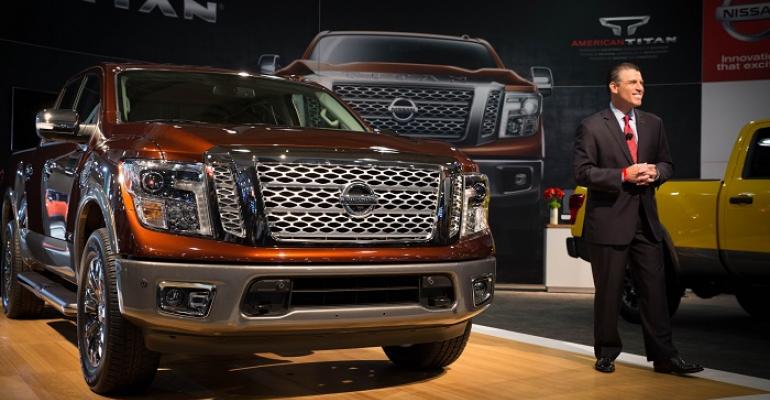 The second generation of Nissan&rsquo;s fullsize pickup will be slowly filling dealer lots this year, with a wide variety of variants still to come.

“That’s been the plan all along, so we don’t make any mistakes as we’re going through this launch,” Diaz tells WardsAuto of the purposefully slow ramp-up in an interview here last week.

Diaz says truck buyers, especially those who use the vehicles for business, have a keen eye and Nissan does not want to make any missteps.

“With truckers you can’t sacrifice any quality, particularly because a lot of them do use their trucks for work,” he says. “So the most important thing with these five launches that are going to take place throughout this year is to make sure that we launch with proper quality (and) not take any shortcuts just to stay on a launch schedule.”

Besides the in-market XD diesel, Nissan is launching a 5.6L gasoline V-8 option for the XD this spring, followed by the non-XD Titan with the 5.6L in a crew-cab configuration in late summer, then that same truck in single-cab and king-cab body styles later in the '17 model year.

Titan sales were up 25.6% through February, which Nissan has credited to the new ’16 XD, although most of the 1,997 Titans sold in the year’s first two months were the outgoing ’15 model.

Another reason for the slow early sales of the XD is the only units in the market are the top-trim-level Platinum Reserve. Diaz reasons buyers opting for a nearly $60,000 pickup are more particular as to colors and options.

“They usually want the exact model they want,” he says, noting lower-priced trim levels will start arriving in dealerships in the next month or two, with the next lowest-priced grade, the SL, next on deck.

Unlike the first-gen Titan, Nissan is planning to sell the new model to commercial and business fleets, but Diaz says his focus this year is getting sufficient units for retail sale to dealers.

“We’ll do a little bit of fleet this year just to get the vehicle out there, but not enough to even mention,” he says.

Fleet is a key reason why Nissan is doing a single-cab Titan. “In all of our research we found the single cab was very, very important, particularly the single cab with a really long, 8-foot (2.4-m) bed. It’s a great business/commercial vehicle,” Diaz says.

The Japanese automaker is planning a special sales and marketing push in Texas, where one in five pickups are sold in the U.S., but Diaz doesn’t want to direct too many resources to selling the truck in the Lone Star State or southern U.S.

“Texas is a very, very important market to us, but really for this truck to be successful I don’t want to just focus on the smile states of the United States,” he says.

Nissan chose to first launch the pricey half-ton XD model with a Cummins turbodiesel to attract attention to a vehicle that had not fully redesigned since its 2003 debut.

Diaz says that strategy has been paying off, per social media and dealer chatter.

“’The strategy of planning that marketplace between the 1500 and the 2500 with your XD is spot-on,’” Diaz says the brand’s dealers are telling him. “Those are the customers that are buying, that are coming in to see these trucks.”

Nissan has said it hopes to hit and sustain 100,000 annual sales of the Titan in the U.S.

While that’s a sliver of the more than 700,000 F-Series Ford sold last year, the Titan is crucial to the automaker’s plan to increase market share in the U.S. to 10% as soon as this time next year.

“It’s going to be, frankly, a lot of what propels our growth and market share going forward,” Diaz says.

Large Pickups made up 12.0% of U.S. LV sales last month, per WardsAuto segmentation. Within that group, the Titan’s share held steady from year-ago at 0.1%. The F-Series took the biggest slice of the segment, 4.1%, down from 4.3% in January and February 2015.