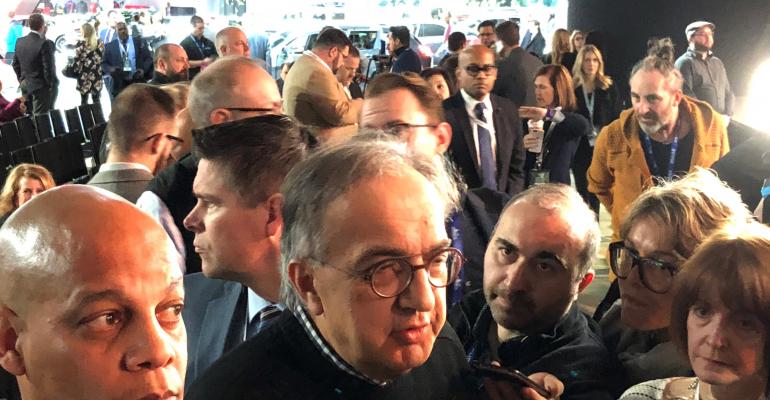 One bonus this year will be the Republican tax cuts. Marchionne says they will be worth $800 million to $1 billion. &ldquo;That&rsquo;s a big number,&rdquo; he says.

It’s been quite a ride for Fiat Chrysler Automobiles CEO Sergio Marchionne since Fiat acquired the former Chrysler Group in 2009 for $5.6 billion, saving it from liquidation and the loss of tens of thousands of jobs at Chrysler plants and suppliers.

There have been a lot of highs and lows over the past nine years, but the strong 2017 financials released today show Marchionne has built a valuable company from Chrysler’s ashes, one he hopes to sell or merge with another automaker to form a larger entity that will have more purchasing power and resources to face the staggering challenges of globalization, electrification and automation.

Marchionne plans to retire from FCA at the end of 2018, when his last 5-year plan for the automaker is completed. During an hour-long press conference last week at the North American International Auto Show, he makes it clear he plans to end his tenure on a high note and that includes becoming debt-free this year and hitting his plan’s ambitious long-term sales and operating income targets.

He is modest about the recent run-up in FCA’s shares. “The adjustment in the share price is the market recognizing this horse didn’t smell as bad as it looked,” he says.

Marchionne’s merger overtures to General Motors have been spurned repeatedly and he isn’t talking about any possible negotiations with other companies.

However, he tells reporters he is not selling FCA to GAC, its manufacturing partner in China or breaking the company into pieces that can be sold separately.

“We are not going to break up anything,” he says emphatically. “I never said that, I never suggested we would break it up. There has been a charm in the financial wisdom of being able to extract things of value from an amalgam like FCA that may have a variety of brands and activities that show different profit profiles. But we have no intention of breaking it up and giving anything to the Chinese. We have a very good partner in GAC who also is present in the (Detroit) show. We work with them, they have global ambitions…none of these things are designed to impact on the U.S.”

One bonus this year will be the Republican tax cuts. Marchionne says they will be worth $800 million to $1 billion. “That’s a big number,” he says. “The purpose was to give the economy a boost and the business environment developed a sense of confidence about the future, and that’s exactly what we were waiting to hear.” FCA gave $2,000 bonuses to employees due to the tax cut.

FCA also won praise from President Trump for moving production of heavy-duty versions of the Ram pickup from Mexico back to the U.S.

When it comes to investing in new electric propulsion systems and autonomous cars, Marchionne suggests many automakers are guilty of irrational exuberance rather than him being overly cautious.

“These proclamations we hear about the advent of electrification and artificial intelligence and their inevitable association are at best conjecture. I start off with the very clear view that most of these things undoubtedly are going to happen directionally…but it will take an awful long time for it to happen.”

He points out that last year electrified vehicles accounted for only about 3% of the U.S. market and still face many hurdles before they can be expected to reach significant volumes.

“I don’t know anybody making money with EVs. I’ve heard all the announcements and the noise that is being made, especially at places like this (auto shows). The media encourage them to show the most irrational side of themselves.”

Marchionne is equally skeptical of how fast the migration to fully autonomous vehicles will be. A philosophy student in college, he paraphrases the philosopher Ludwig Wittgenstein, saying: “We cannot fool ourselves into talking about a reality we really don’t understand.”

He sees the future of diesel powertrains more clearly and is not optimistic about their future in light vehicles, especially in Europe. Not mentioning Volkswagen by name, he says a competitor essentially poisoned the well for all automakers with what he called “non-compliance issues.” Upcoming Euro 6 emissions rules essentially will be the final blow to diesels in small vehicles because the required control systems will be too costly.

He is more optimistic that diesels will continue to help automakers meet corporate average fuel economy rules in the U.S.

“It is my view that diesel continues to hold a place, maybe not the most significant place in compliance strategy for most automakers in the United States. I think it needs to be done with purpose and intent and it needs to be monitored carefully given its history now,” he says.

As for FCA’s own diesel troubles with the EPA and the U.S. Justice Dept., where it is being investigated for having an emissions defeat device on its 3.0L V-6 diesel,  Marchionne says the software “was not done with an ill intent, whatever it was.”

From the start of the investigation, FCA has argued the emissions software in the engine turns off only in highly specific situations to prevent engine damage. After preventing FCA from selling diesel-powered ’17-model Ram pickups and Jeep Grand Cherokees for months, the EPA and the California Air Resources Board did certify the vehicles for sale in late July after FCA tweaked engine-control software.

“I think this is recognition of the fact that the emissions logic is valid,” Marchionne says. “We will deal with it. If we were sloppy we will pay the consequences.”

In addition to a strong balance sheet, Marchionne also is leaving FCA with the beginnings of two powerful luxury brands, Maserati and Alfa Romeo, that have the technology and performance to compete with Europe’s best.

He admits the company’s big investment in Alfa won’t pay off until 2022 or so, but he says strong luxury brands are crucial to survival in a future where electrification and autonomous technology threaten to commoditize vehicles.

“Not developing Alfa, not developing Maserati would have been economically suicidal for FCA ...generic brands are going to have a tough time,” he says.

“If you want brands that are worth attending, be it Alfa or Maserati, you’re okay. Generic brands at the end of the day will have a tough time because they become indistinguishable, commoditized and price will be the only thing that matters.”

Even though he is retiring from FCA, the famous workaholic won’t exactly be looking to join a pickle-ball league to fill his days. Marchionne still will be CEO of Ferrari for several more years while he works on a new vehicle that you don’t dare call a truck.

“By definition it will drive like a Ferrari,” Marchionne says. “It has to. There are enough people in Ferrari that would go absolutely nuts if I tried to do just a utility vehicle.”