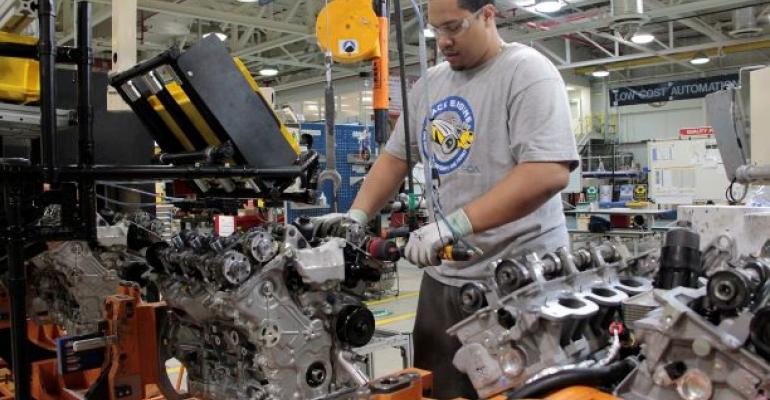 An employee installs the phasor and oil control valve on a Pentastar V-6 engine at the FCA US Mack Avenue Engine Plant in Detroit.
Industry News

The investment program will introduce two Jeep-branded “white space” products: an all-new, 3-row fullsize SUV, along with the Jeep Wagoneer/Grand Wagoneer. FCA tells Wards the latter two products are due on the market in early 2021.

AUBURN HILLS, MI – Fiat Chrysler Automobiles US announces a $4.5 billion investment program in Michigan that includes construction of a new assembly plant in Detroit and expansion of production at five existing facilities in the state.

The moves will create nearly 6,500 jobs, FCA says Tuesday morning in a statement.

“The move would increase capacity to meet growing demand for its Jeep and Ram brands, including production of two new Jeep-branded white space products, as well as electrified models,” the statement says.

More than one-third of the new investment, $1.6 billion, is earmarked for converting the Mack Avenue Engine Complex in Detroit into a manufacturing site for the next-generation Jeep Grand Cherokee and an all-new, 3-row fullsize Jeep SUV. That project alone will create 3,850 new jobs.

The two “white space” products are the Wagoneer models and the fullsize Jeep SUV, an FCA spokeswoman tells Wards. The Wagoneer and Grand Wagoneer are due on the market in early 2021, she says.

In addition to the assembly plants, FCA says it will invest a total of $405 million to support additional production at the Sterling Stamping and Warren Stamping plants, potentially creating more than 80 new jobs at Sterling Heights.

“Three years ago, FCA set a course to grow our profitability based on the strength of the Jeep and Ram brands by realigning our U.S. manufacturing operations,” FCA CEO Mike Manley says.

“Today’s announcement represents the next step in that strategy. It allows Jeep to enter two white-space segments that offer significant margin opportunities and will enable new electrified Jeep products, including at least four plug-in hybrid vehicles and the flexibility to produce fully battery-electric vehicles.”

The projects are contingent on land acquisition and the negotiation of development incentives with the cities of Detroit, Sterling Heights, Warren and Dundee, and the State of Michigan, FCA says. The City of Detroit has 60 days to deliver on commitments outlined in a Memorandum of Understanding related to the Mack and Jefferson North projects.

– with Tom Murphy in Detroit