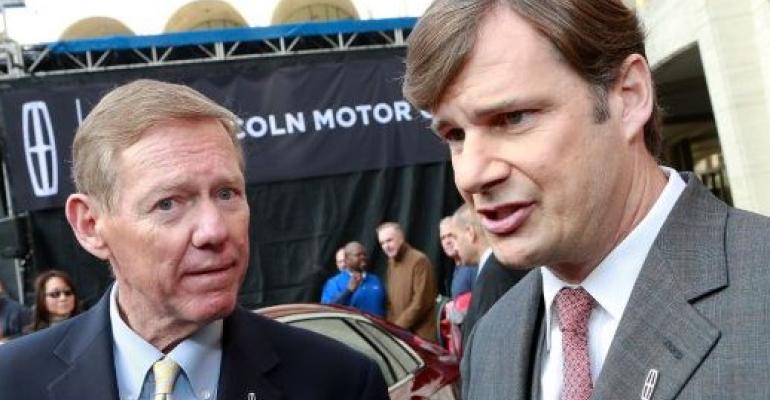 Jim Farley, Ford’s incoming chief operating officer, says the automaker needs to fix its new-product launches, its quality and therefore its warranty costs, and its costs for materials and other expenses such as sales and marketing.

“Everybody at Ford Motor Co. knows the situation we are in. I can see it on the faces of my colleagues,” Farley says Wednesday during a conference for analysts and investors in New York. “It takes me back to about 10 years ago,” when Ford had a near-brush with bankruptcy in what became known as the Great Recession, he says.

Farley’s key words are, “Fix, accelerate, grow.” Much of his emphasis at the conference is on what needs to be fixed in the short term. Farley says Ford needs to fix its new-product launches, its quality and therefore its warranty costs, and its costs for materials and other expenses such as sales and marketing.

Whether intended or not, in some ways Farley’s plainspoken delivery and his citing of the Great Recession invoked former Ford CEO Alan Mulally, who joined Ford from Boeing in 2006 and soon condensed Ford’s then-turnaround plan so it would fit on the back of a business card.

The plan, in just two words, was “One Ford” – shorthand for the urgent need to get Ford’s worldwide operations to quit duplicating effort and costs.

Mulally, 74, is now retired from Ford. He was succeeded by Mark Fields in 2014. The current president and CEO, Jim Hackett (below, left), was appointed in May 2017 after heading office-furniture manufacturer Steelcase. Hackett is taking a lot of heat from investors over a dramatic drop in Ford profits and share price.

Farley, 57, joined Ford in November 2007 from Toyota’s Lexus Div., where he was group vice president and general manager.

Farley’s Feb. 7 appointment as COO was part of a larger management shakeup, which included the retirement of Joe Hinrichs, president-Automotive. In fact, Farley doesn’t officially move into the job until March 1.

Part of Farley’s task at the New York conference is to demonstrate he has hit the ground running. Within days of his appointment, he says, he and his chosen team came up with the outlines of the to-do list he shared Wednesday. In a question-and-answer session, an analyst asks Farley that if the problems were so obvious, why didn’t they get fixed sooner – or were the root causes misunderstood?

“No. I would say the root causes – it was a bit of a discovery process,” he responds. “But like the warranty opportunities, yeah, it’s taken a little work, but … there were issues people knew about that just weren’t getting resolved. I wish I could take you in the room.

Along with the new title, Hackett handed Farley his own to-do list earlier this month. At the top is to deliver a “sustainable” adjusted pretax profit of at least 8% – a figure specified in the press release announcing Farley’s new title.

That’s a tall order, considering Ford’s adjusted pretax profit was just 1.2% in the fourth quarter, down from 3.5% a year ago. In its fourth-quarter earnings report, Ford blames lower wholesale volume (down 8%), and increased investment in mobility.

Prior to Feb. 7, Farley was president of New Businesses, Technology and Strategy for Ford. He says that position allowed him to cultivate close relationships with high-tech companies and to view the automotive business somewhat at arm’s length.

“For the last eight months, I’ve been really focused on the future,” Farley says. “When I took a look at our business from a distance, we were doing a good job shrinking our business, and we had a good near-term product plan.” Now, however, Farley says he’s concentrating on opportunities to grow.

Farley says connectivity will be a key driver in improving financial results. He says that means using data from connected vehicles to catch and fix quality problems much faster, and document how customers actually use their vehicles. In the long run that’s going to save a lot of costs and improve customer experience, Farley says.

He also stresses that Ford’s commercial-vehicle business will be an important driver behind better results, especially since commercial vehicles are ahead of the car business in terms of connectivity and electrification of powertrains.

“The one thing that makes Ford different is our global prominence as a commercial-vehicle brand. It’s very natural for us,” Farley says. “We have excellence not just in the U.S. but around the world in commercial vehicles. The growth rate is far in excess of the market.”