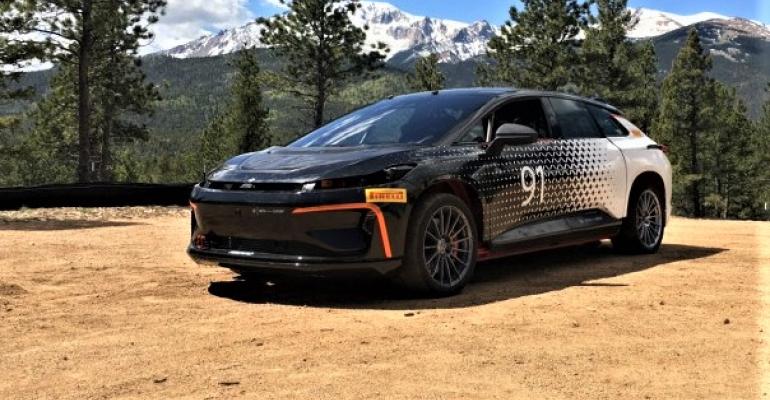 Carsten Breitfeld, who played an integral role in BMW’s entry into the EV market with the all-electric i3 and plug-in hybrid i8, will take over as CEO with the specific goal of delivering Faraday Future’s first production model.

Faraday Future, a Chinese electric vehicle start-up that has teetered on the brink of bankruptcy for most of 2019 following mass layoffs late last year, names the former head of BMW‘s i electric-vehicle division to lead it out of its financial difficulties and launch its first production vehicle.

Carsten Breitfeld, who played an integral role in BMW’s entry into the EV market with the all-electric i3 and plug-in hybrid i8, will take over as CEO with the specific goal of delivering Faraday Future’s first production model.

The German executive has broad experience in the Chinese EV start-up ranks, having filled key positions at Chinese rivals Byton and Iconiq since leaving BMW in 2016.

Breitfeld succeeds Jia Yueting, founder of Faraday Future. Yueting, who stepped down as CEO as part of stipulations demanded by company investors, will continue to play a senior role as chief product and user officer.

The key aim in the appointment of Breitfeld is beginning production of the Faraday Future FF91. First revealed at the 2017 CES in Las Vegas, the large crossover-style vehicle reportedly has been developed to a near-to-production-ready-state. However, crippling debts attributed to Yueting’s flamboyant management style and the high cost of EV development has seen plans for it to be built at a factory in Hanford, CA, placed on hold.

“The priority now is fundraising. We will go to the capital markets,” Breitfeld says. “In the first stage, it will be a three-digit-million dollar amount that’s still missing to make all of this happen.”

Breitfeld says his initial focus at Faraday Future will be hiring new staff in North America. The Chinese EV start-up employs around 600 people worldwide, almost half of which are in California.

In keeping with original plans, the FF 91 will be sold in both two- or three-motor configurations and produced in Hanford. Pricing is pending, though it is expected to be upwards of $150,000.

“What is missing now is execution,” Breitfeld says of Faraday Future. “This is where I see a bit of my value coming in, because this company has a great vision.”

Faraday Future was saved from almost certain bankruptcy earlier this year with a cash infusion through a joint venture with The9 Ltd, a Chinese online-gaming company.

The Evergrande Group, the property conglomerate owned by Hui Ka Yan, China’s third-richest man, pursued a significant investment in Faraday Future in 2018. However, it failed to go ahead when additional investment promised by the Chinese EV start-up failed to materialize.