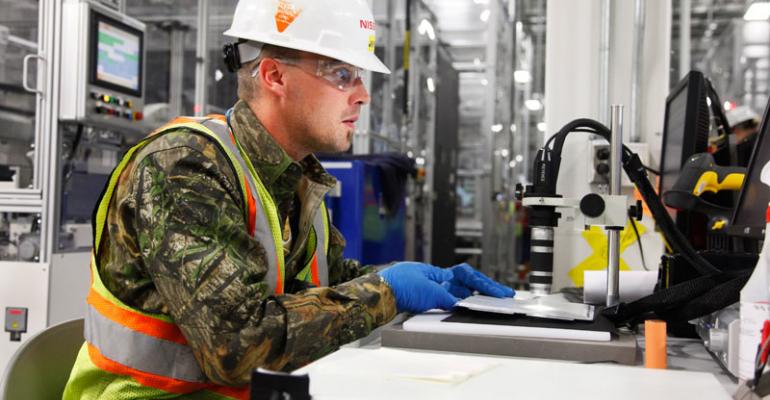 The Japanese auto maker keeps tight control on conditions inside the Tennessee plant to protect the integrity of the Leaf EV&rsquo;s energy source.

SMYRNA, TN – Up and running since December, Nissan’s new lithium-ion battery assembly plant here is a relatively quiet, carefully controlled environment, with extreme measures taken by workers to ensure quality of the battery modules bound for the Leaf electric vehicle built next door.

“Other than some material-handling functions or loading material to the line, (assembly is) completely automated,” Plant Manager Jeff Deaton tells media during a recent tour. “That way we can control the quality (and) it’s very repeatable.”

The journey to a finished module begins in a clean room at the rear of the plant, where a single worker removes the protective plastic bag from an electrode roll, shipped from Nissan supplier NEC in Japan, to begin production of the battery cells.

Each 24-kWh Leaf Li-ion pack contains four laminated cells per each of its 48 modules, or 192 cells total.

Airlocks exist at every entrance and exit of the clean room, a white, windowed building within the larger plant.

Clean-room workers wear white jumpsuits, booties and face masks to prevent skin cells, hair or clothing fibers from contaminating the roll. High-efficiency particulate air (HEPA) filtration is used as a backup to clear any debris that still manages to enter the room.

Around the corner from the unpacking operation, the large electrode roll moves to another area of the clean room, where it is sliced into smaller rolls the width of a battery cell that then are placed in ovens where they are dried to the correct moisture level.

“With the battery cell open, if there’s moisture, it would react with the lithium and it would destroy the quality of the battery,” Deaton says.

After drying, the electrode rolls go into the stacking area of the clean room, where they are unfurled and sliced into sheets.

Electrode sheets are divided into cathodes and anodes. Ions flow out of the former and into the latter when charging, and the process reverses during discharge.

Each cell in the Leaf’s Li-ion pack contains roughly 68 layers of cathode, anode and insulator-like separator film, the latter used to prevent shorting.

The film has holes that allow passage of the ions between the anode and cathode.

“Alternating stacks of this are produced with high-speed robotics, and once that stack is assembled…we ultrasonically weld those (electrode layers) to those films to electrically connect them,” Deaton says.

The stack is placed in an aluminum pouch, manufactured here on-site and sealed on three sides. The fourth side is left open, and the pouch then moves to the electrolyte-injection process within the clean room.

After the injection of a small amount of electrolyte, a salt-based solution mixed by the Tennessee unit of a Japanese supplier, ions are able to pass through the separator film.

The pouch is sealed and leaves the clean room in crates transported on an automated guided vehicle.

The crates are delivered to the nearby aging area, the only portion of the plant that runs four shifts, 24 hours a day, seven days a week.

Nissan won’t divulge the exact length of the aging process, which Deaton ballparks at “a few weeks.

“Each manufacturer has (its) own recipe, if you will,” he says. “Ours is a little different.”

Aging is a chemical process that uses time and temperature to prepare the cells for application in vehicles.

“There are basically some boundaries that are forming between the electrode sheet and the liquid electrolyte, and those need to be formed properly so that the battery cell will perform to the design requirement,” Deaton says of aging.

Inside the aging room, robots make a small hole in each cell to allow gases to escape.

Electrolyte injection and aging processes pose the most risk of fire in Li-ion battery manufacturing.

Because the aging room is an airtight box, dampers are affixed to the outer walls to lower oxygen content in the room should a fire occur. 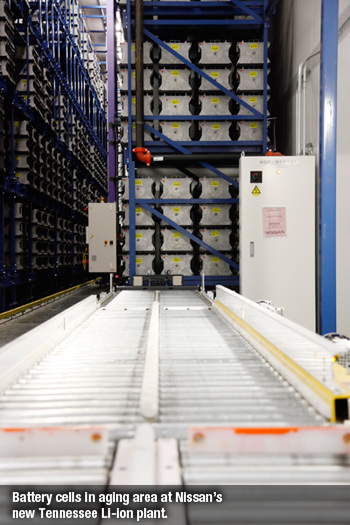 “Those dampers would open to allow the existing air to come out of the room, so we don’t blow the walls open,” Deaton says. “We hope we never have to use them.”

After charging and discharging the cells in test tunnels outside the aging room, the AGV transports finished cells to the module assembly area, where a “4-stack” of cells is placed inside a metal case.

Finished modules are sent next door to the vehicle assembly plant, now the source of all Leafs for the U.S. and where the Li-ion pack is assembled.

Nissan’s battery plant here employs 300 people, including salaried engineers, but most are working behind the scenes as robots complete many of the required tasks.

Smyrna’s robots are “a little more optimized than the ones” in Zama, Deaton says. “The (Zama battery plant) had a period of time in production where they learned some ways to make the process better, and we had time to incorporate that.”

Other than the 24/7 aging operation, the plant runs two shifts, four days a week.

Deaton estimates there are 100 employees at most in the plant at any one time.

Most of the hourly and management workers at the battery plant were culled from the Smyrna vehicle-assembly plant next door or other Nissan locations in the state.

Out of the “excess of candidates that had the aptitude to learn these jobs within the labor pool,” Deaton says, Nissan selected 26 hourly workers for the battery plant based on job performance, ability and interest in the Li-ion manufacturing process.

Workers traveled to Japan for training and a crash course in all things Leaf.

Nissan claims the Smyrna battery plant is the largest Li-ion manufacturing facility in the U.S.

Currently, only Leaf Li-ion cells and modules are produced at Smyrna, but Nissan officials have said the plant could begin manufacturing batteries for hybrid-electric vehicles here as a way to better utilize capacity.

Nissan hybrids are transitioning to Li-ion batteries and away from older nickel-metal-hydride technology.

Smyrna has the capacity to produce 200,000 battery packs annually. Nissan initially planned to assemble 150,000 packs solely for the U.S. and export the remainder.