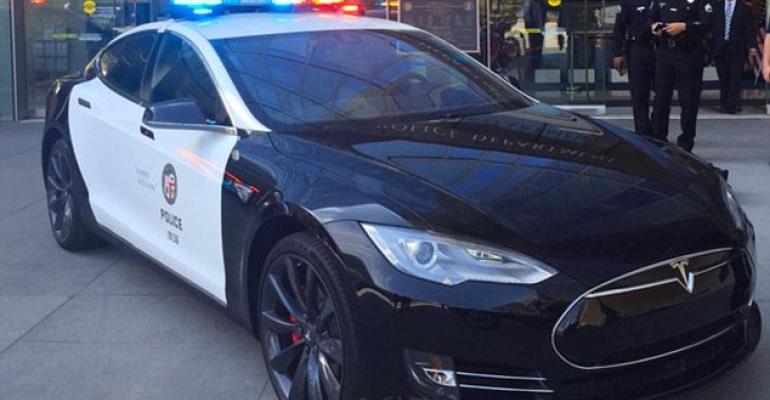 Expert Not Electrified by Tesla As Police Cruiser

The LAPD last year began road-testing two Tesla Model S P85D cars as well as BMW i3 extended-range EVs, mainly for handling and performance. Earlier this year, the department ordered 100 of the i3 subcompacts.

Jay Cole, editor-in-chief of website InsideEVs, which provides news and analysis focusing on the EV market, tells WardsAuto by email, “Having the Model S itself taking on an active-duty, potential high-speed pursuit vehicle is significant, as up until (now) electric cars have been purchased with an administrative or investigatory role in mind.”

However, media coverage of accidents involving Autopilot, Tesla’s self-driving technology, has been “incredibly vigorous,” Cole says, so it “may ultimately not have been the best idea to intentionally have put the car in harm’s way.

“If, indeed, the Model S is put in active duty and given a rotation with officers, it could find itself in the middle of another media storm should it find itself in a high-profile accident.”

It’s great to see an EV “filling the role once reserved for only the most capable, robust internal-combustion vehicles, but the risk versus reward from a marketing perspective might not be a real great trade-off.”

About a year ago, the LAPD began road-testing two Tesla Model S P85D cars and BMW i3 extended-range EVs, mainly for handling and performance within a dynamic community setting. Earlier this year, the department ordered 100 of the i3 subcompacts.

Some market-watchers concluded the BMWs, with a base price of about $42,000, was a rejection of the Model S, with an average starting price of $100,000. A typical LAPD patrol car costs about $47,500 once it’s been painted and outfitted with the necessary police equipment.

The force’s i3 models since have been used for a variety of non-emergency purposes but not patrol duty. In a widely circulated report, a department spokesman said the typical ICE patrol car can exceed the BMW’s single-charge capacity of between 80-100 miles (108-150 km) and 0-60 mph (97 km/h) acceleration of 7.2 seconds.

That said, one of the two Teslas being tested has been selected to be further modified – beyond its exterior black and white paint – with a full complement of radios, computers, a custody cage, a locking shotgun rack and other law-enforcement hardware. The EVs would be driven by officers during real-world calls, possibly including Southern California's well-known and often-televised vehicle chases.

The speed of the Model S is one factor Cole says should give pause to those involved in the evaluation process.

“Are police officers, who are human at the end of the day, really capable of handling a Model S with that sort of performance in a high-pressure situation? Is Mario Andretti?” Cole says. “And are they restrained enough to always drive it reasonably under the public’s eye?”

Any mishap during a test run could drop Tesla and the already high-profile Model S in the middle of a political media storm,” Cole suggests, adding that in turn could prompt  renewed scrutiny over whether the police department should even consider purchasing such a high-performance luxury vehicle with its luxury price.

“The LAPD and Tesla have basically gotten most of the attention – ‘eyeballs’ on the program,” he says. “Quite likely, the next attention given the program will be more critical in nature. It is only a question of what direction it might come from.”

Beyond making inroads into the law-enforcement market, Cole is dubious about other benefits its association with the LAPD could offer Tesla’s positioning of the Model S, which so far this year is “absolutely crushing the six-digit passenger-car market,” in sales, he says. “Tesla would be hard-pressed to do much better, and even if they did, it would not translate into many sales in terms of actual volume.”

Besides, he isn’t sure if Tesla’s target demographic for the P-Series Model S, which starts at about $112,000, “identifies with or even wants to identify with the LAPD.”

Cole echoes the arguments of other market analysts saying a better economic fit for the LAPD would be Tesla’s all-electric Model 3, which is expected to have a single-charge range of about 215 miles (345 km) and a base price of about $35,000. Tesla, however, says Model 3 production will not begin before mid-2017 and the first deliveries are not expected until mid-2018.

In contrast to the Model S, being associated with the perceived power of the police department likely would boost the Model 3’s public image. But the LAPD so far has not indicated interest in the Model 3.

For now, Cole says, visions of a Tesla patrol car probably will prove to be little more than a diversion from one Tesla’s primary goals: to provide the world with affordable electrified vehicles.

The automaker’s surest road to success, he says, is the one it’s on now, “moving several classes lower into the mainstream market with the Model 3, and Model Y at some point,” where there are “still many, many more conquest sales available to be made, millions of them.”