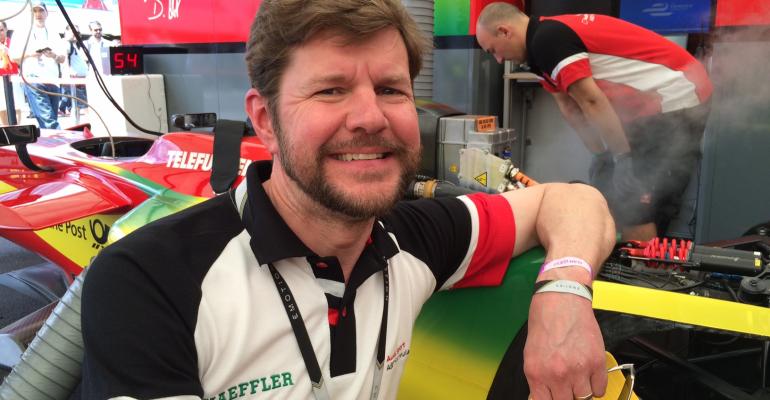 MIAMI – For a first-of-its-kind electric car race in the U.S., this city carves out a course using roadways that usually carry urban traffic heavily skewed toward gasoline-powered vehicles.

But sponsors of the FIA Formula E race say the event makes a big point in the U.S., as it did at previous stops in China and South America. If world-class drivers take EVs seriously in their fast-track careers, so should more people.

EVs and the like get a lot of attention but draw relatively few U.S. buyers. EV market share is a scant 0.34%, according to WardsAuto data.

Yet, the auto industry more and more looks to electrification at various levels to face the future, which includes the need to meet ambitious government fuel-economy mandated averages of 54.5 mpg (4.4 L/100 km) by 2025.

He talks about the EV market, innovations of the present and future and how different levels of hybridization are finding their way into gasoline-powered cars.

WardsAuto: Why is there hope for electric vehicles in the U.S. market if so few buyers seem interested in them?

Hemphill: We’re about reaching the point where it’s hard to meet CAFE standards without some kind of electrification. We’ll need some more affordable mild hybridization in higher volumes. We’ll have some full electrics, hybrids and plug-in hybrids in smaller volumes to fill out the portfolio and meet those CAFE standards. It’s a race between fuel economy and affordability. It will take a portfolio to win.

WardsAuto: If it’s mild electrification now, what’s the next step?

Hemphill: Today, you have the availability of a full spectrum of hybrids and even up to electrics. You have the Chevy Volt plug-in and Toyota Prius full hybrid. And you have the full electric Nissan Leaf and Tesla. It’s a question of filling in the volume.

WardsAuto: You mentioned 48 volts. Is the industry moving in that direction?

Hemphill: It’s gaining momentum. Ten, 15 years ago, there was a push toward 42 volts. That was more about accessory modes, seat heaters and that sort of thing. Now, it’s recognized that if you push it up to 48 volts, you’re still within the limits of not needing a lot of special safety systems. That saves a lot of money. You can’t electrocute yourself with 48 volts.

You can still do about 12 kilowatts practically with a 48-volt system. That makes it a much more affordable hybridization. It seems like a sweet spot. There’s been more and more activity, even in the North American market, which was a little surprising to me.

WardsAuto: What surprised you?

Hemphill: It started in Europe, and the initial feedback from our customers in the U.S. was that they didn’t see the value proposition, and they weren’t going to pursue it. But now, there’s more interest in the U.S.

WardsAuto: When do you think the 48-volt system will hit prime time?

Hemphill: It might become part of the solution for mild hybridization that’s more affordable and in higher volumes.

Batteries of the Future

Hemphill: The whole question of electrification hinges on the battery. For EVs and plug-ins to become commercially viable, you need a cheaper battery with a longer range.

Lithium-ion has come a long way. It’s continuing to improve. In the medium-term, we’ll see things like solid-state batteries where the manufacturing is less like silk screening and more like making semi-conductors.

WardsAuto: That would make it easier to manufacturer?

Hemphill: Yes, it also helps the power density because you can arrange the molecules in the battery if you do more of a solid-state manufacturing process.

So, there’s a long way to go with lithium-ion. And some revolutionary chemistries are out there.

Hemphill: Lithium-air batteries and sulfur batteries. Some people even think a flow battery will become the norm.

WardsAuto: What’s involved with that?

Hemphill: You charge the battery with a slurry of material like aluminum, allow it to oxidize as it flows through the battery and extract electricity. Then you can recycle the electrolytes. It would almost be like filling up your car today, but you are filling it with a substance that can quickly oxidize and make a bunch of electrons and then be recycled.

Hemphill: They’re still in the laboratory. But there’s reason to believe that in the next five, 10 or 15 years, you’ll have a real breakthrough.

Are Days Numbered for Lithium-Ion Batteries?

WardsAuto: That would replace lithium-ion?

Hemphill: Those kinds of chemistries promise energy densities in the realm of a gasoline-powered car. So it would be like the amount of energy you could hold in your gas tank as opposed to today, where a large battery holds about 10% of that energy.

Hemphill: If you call 15 years numbered, yeah, they’re numbered. But to really have a breakthrough where electric cars could become truly mainstream, it’s hard to imagine you’d get that range, cost and mass reduction from extending the performance of lithium-ion.

WardsAuto: Isn’t it a tall order to reduce the size and cost of a battery while increasing its power?

Hemphill: It ends up as a magnitude change in the cost per unit of energy stored in the battery.

Hemphill: Ten times. That’s a lot. But if you get there, you can imagine things changing pretty quickly due to a commercially viable battery with 10 times the capacity.

WardsAuto: And that would lead to how much more acceptance of EVs by the marketplace?

Hemphill: Look at the complexity of a combustion-engine powertrain compared with an EV. If you had all the range and recharge time that you needed in an EV, you probably wouldn’t choose to invest in a turbocharged, variable-valvetrain, 10-speed automatic-transmission powertrain.

If you do have that battery breakthrough, EVs could become mainstream.

WardsAuto: What’s Shaeffler doing for the cause?

We’ve got hybrid-module projects where, for example, the electric motor and clutch go between the engine and transmission to basically hybridize a conventional car.

Farther out, we’re looking at electric axles for either fully electric vehicles or electric all-wheel drive. For the far future and as part of an urban-mobility solution, we’re working on wheel motors where you can really reconfigure the entire vehicle, because the powertrain is in the wheel. That could go in a small car like a city taxi that doesn't go fast.

WardsAuto: What’s the point of Schaeffler sponsoring cars in this EV race?

Hemphill: We want to not just participate in the auto industry’s future, we want to help drive it. Through events like this, we can make a rallying point around electrification. If you can do formula racing electrically, maybe there’s more you can do.

There’s a lot of learning, too. Next season, we are allowed to make our own powertrain for this race. This season, all the powertrains are standard. Next time, you can make your own motor and transmission. We’re in the process of doing that.

We also hope to get our name out there as a forward-thinking company, and attract talent from doing that. There are lots of benefits.